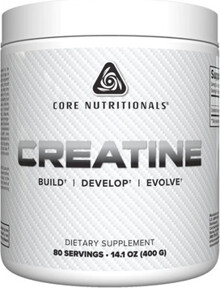 Go to Store
Quick Links to Deal PricesHow does this work and how do stores get listed? See our disclosure below to learn more.
Size
Deal Price
400 Grams
$40.00
Go to Store
Go to Store
Compare store prices

Creatine monohydrate has been shown to:

Every write-up crafted about creatine, including ours, should simply say: it’s creatine, enough said. This is, after all, the most studied, the most anecdotally verified, and the most well known dietary supplement available to us – and with good reason. The evidence on creatine truly does, “speak for itself.”

With that said, much hoopla has arisen over the past few years regarding how to take creatine, when to take creatine, which form is the best, and so on. We have simplified that for you, and provided you the best, highest purity creatine monohydrate on the market at a competitive price – unbeatable, we’d say!

Creatine is perhaps the most studied and verified of all dietary supplements, earning its moniker as the, “grandfather of supplements.” Through a number of enzymatic and cellular steps, creatine is first metabolized into a compound known as phosophocreatine, and eventually into a compound known as ATP (adenosine triphosphate) – the so-called, “energy currency” of the human body. As a dietary supplement, the use of creatine over extended periods of time has been linked to a wide-range of physiological benefits, including: cell volumization, increased delivery of plasma (blood) nutrients to the cell, an increase in skeletal muscle total mass and protein synthesis, decrease in muscular fatigue, and increased endurance.