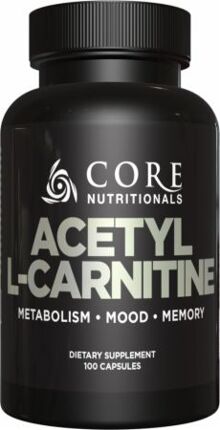 Go to Store
Quick Links to Deal PricesHow does this work and how do stores get listed? See our disclosure below to learn more.
Size
Deal Price
100 500mg Capsules
$11.99
Go to Store
Go to Store
Compare store prices
See all Core Nutritionals Products on PricePlow
Ingredients

Acetyl-L-Carnitine (ALCAR) is a little bit like your 401K: you need it, you know you should pay attention to it, but it’s not exactly the sexiest topic. We know; we feel you! But we also know that ALCAR is one of the most fascinating, useful, and physiologically exciting workout supplements on the planet. You’re hard-pressed to find a single other ingredient that is involved in so many critical bodily processes: fatty acid and carbohydrate metabolism, neurotransmission, exercise performance and capacity, brain function – the list goes on! So, like your 401K contribution, don’t forget to pay into your ALCAR fund.*

Unfortunately, due to excess metabolism of l-carnitine by microorganisms in the small intestine, exogenous supplementation with oral l-carnitine has proved ineffective. ALCAR, an acetylated version of l-carnitine, has considerably higher oral bioavailability, due likely to only partial hydrolytic metabolism. Once in the bloodstream, ALCAR plays a fundamental role in the production of energy, acting as the catalyst for the beta-oxidation of long chain fatty acids by the mitochondria; regulating the CoA to Acyl-CoA ratio (necessary for the production of ATP); and the metabolism of carbohydrates. ALCAR also is an excitatory agent for neurons, increases neuronal transmission, and increases the production of neurotransmitters and neurohormones such as dopamine and serotonin.*