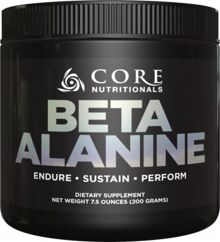 Go to Store
Quick Links to Deal PricesHow does this work and how do stores get listed? See our disclosure below to learn more.
Size
Deal Price
200 Grams
$16.00
Go to Store
Go to Store
Compare store prices

Beta-Alanine (as CarnoSyn) has been shown to:

You know the tingling sensation you get after taking beta-alanine? Well, we are here to reveal the long held secret behind that feeling, guarded for years by bodybuilding elitists: it’s nothing less than the feeling of magic, and success.

Of course, we are kidding. Who do we look like, every other supplement manufacturer? That sensation is actually a phenomenon known as paresthesia, induced when the nerves under the skin are bound to and activated. It is thought that beta-alanine binds to these same nerves, and thus produces the same sensation.

With that said, beta-alanine’s effectiveness and versatility have given it an almost magic-like status amongst fitness enthusiast. With evidence demonstrating reductions in fatigue in response to high intensity exercise, amongst other things, you might think it’s magic, too!

Beta-alanine is the rate-limiting substrate in the production of intramuscular carnosine, and its supplementation is responsible for directly increasing levels of carnosine in skeletal muscle. As a dietary supplement, beta-alanine has a range of applications, including serving as a cellular buffer, and increasing the capacity of skeletal muscles for work. Trials in humans have demonstrated that beta-alanine supplementation is directly linked to an increase in muscular strength in acute challenges, increased muscular performance, and a decrease in muscular fatigue.