Creatine is a naturally occurring amino acid that is vital in providing energy to the muscles. As a supplement, creatine monohydrate is basically creatine in its purest form.

Creatine is used throughout the body whenever a particular organ or tissue has an immediate need for a lot of energy. The one benefit that supplementation is really useful for, however, is the enhancement of muscle function.

For bodybuilders and athletes, creatine is primarily hastens muscle growth. Creatine monohydrate is converted into creatine phosphate by the body, which is needed in conjunction with adenosine diphosphate (ADP) to create the adenosine triphosphate (ATP), which then fuels working muscles. A pure creatine monohydrate supplement is the most effective way to provide the body with this fuel source.

Elevated levels of creatine monohydrate translate into the ability to do more reps and sets, which helps build muscle more rapidly.[1,2]

The standard daily dose of creatine usually suggested by supplement manufacturers is 5g. Creatine monohydrate does not need to be taken at any specific time. You'll probably hear arguments at the gym about whether it's optimal to take it pre- or post-workout, but the science doesn't show any significant difference in muscle gains based on time of consumption.

Taking larger doses of creatine is generally not beneficial as the body can only hold a finite amount of ATP — anything produced above that level will be excreted immediately.[3] 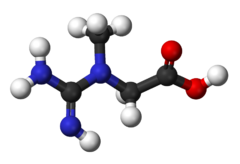 Creatine monohydrate is nearly always sold in jars or tubs of powder. These will often come with a pre-sized 5g plastic scoop. It's also available in tablet form, though the dosages vary widely by manufacturer and you'll probably end up paying a premium over the same amount in powder.

If you're a keto dieter wondering if creatine will drop your blood ketone levels or boost blood sugar - don't worry - Mike's tested it and it passed with flying colors!

Though creatine is one of the safest and most thoroughly studied supplements out there, not everyone responds well to it in terms of training. The exact biological mechanisms are unknown, but for some people, creatine supplementation seems to have little to no effect on muscle function.[6] The only way to find this out is to try some, which is perfectly safe.

Creatine supplementation may have a more pronounced effect if you're on a vegetarian or vegan diet, as meat eaters will likely already be getting it regularly through their meals.[7]

Creatine is mostly found in animal muscle and organs. However, cooking degrades most of the creatine into an unusable, useless compound.

Creatine is mostly found in animals in the same places it's found in humans — muscles and organs. However, it's difficult to get your daily 5g from eating meat because cooking degrades most of the creatine into an unusable, useless compound.[8] You'd also have to eat a large amount of raw animal flesh to reach your 5g goal (1-pound of fish, or 2 to 3-pounds of beef). Keep in mind that a single serving of meat and fish, according to the USDA, is just 3oz. So by attempting to get the suggested dose of creatine from your diet, you will have to eat anywhere from 5 to 15 times the recommended serving, which could wreak havoc on your weight.[9]

Though creatine, in its pure form, is a safe, natural substance, not all supplements are 100% pure. Poorly manufactured creatine may be contaminated with dycyandiamide and creatinine. These substances are not considered harmful at the recommended dose, but they displace the beneficial creatine monohydrate in each serving, which results in a less potent product.[10] Look for a supplement manufacturer with a good reputation and one that provides testing results from a reliable, independent laboratory, such as a research university.

Though creatine is generally regarded as safe, it's always wise to speak to a doctor before making major changes in your diet or training routines, particularly if you're taking a prescription medication.

Creatine monohydrate is available here at PricePlow and at 30% to 50% off of retail pricing. Let our price comparison engine do the shopping so you can focus on your workout.

Sign up for future Creatine Monohydrate deals and coupons!

BUILD / DEVELOP / EVOLVE Creatine monohydrate has been shown to: Increase muscle mass/size (when used in conjunction with a resistance training...

Platinum 100% Creatine provides your muscles with the most clinically researched form of micronized creatine available!

Glaxon’s Electro-Creatine Is a simple formula featuring the most tried-and-true form of creatine on the market - Creatine Monohydrate - combined with our Astrolyte Electrolyte Blend to help...

What can be said about creatine that hasn’t already been said a thousand times over? It is the single most successful, consistently proven effective bodybuilding supplement in history. Creatine...