If you're here to find our prohormone guides, start with our 1-Andro article!

Most Prohormones BANNED in 2014 by DASCA. Hi-Tech Responds with Others

Update: Not all prohormones were banned! The next wave of legal prohormones now take a two-step conversion to get to their target. The most popular of the bunch is 1-Andro, also known as 1-Androsterone or 1-DHEA. More articles on the next wave of prohormones are coming, and they're legal, unlike SARMs! 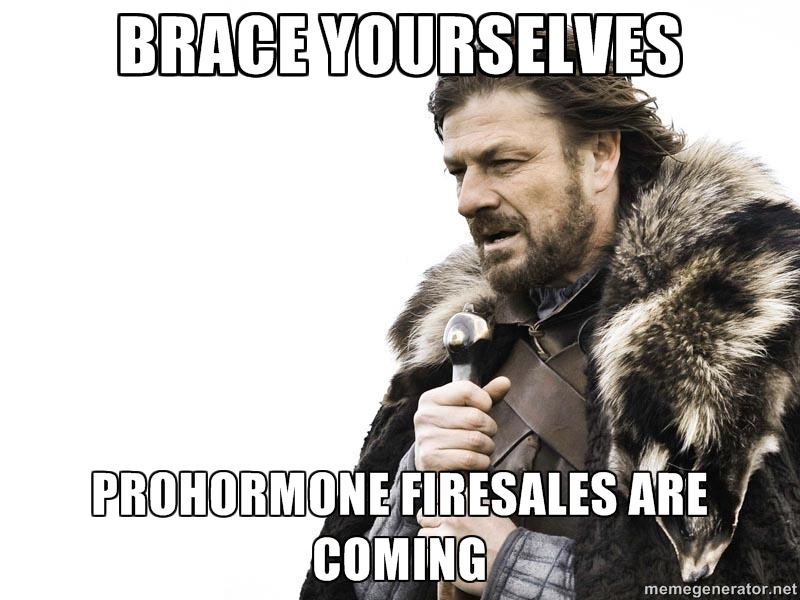 This effectively ends the sale of most designer steroids and prohormones, and makes some major changes in the enforcement of anabolic steroid distribution. However, as we'll discuss below, a batch of DHEA-metabolite prohormones, including 1-DHEA (1-Andro), are still legal.

The law took place immediately - meaning they are illegal NOW, with no grace period.

This new enforcement comes after years of stipulation and industry tip-toeing around current legislation, and will force major changes on this side of the industry.

Prohormones have been "banned" in the past, but it's the second point that makes this one a bit more wild:

HR 4771 moves enforcement from the FDA's hands and puts it into the DEA's, and severely lowers their burden of proof.

This takes it from a busy, slow agency to a fast, aggressive agency that's armed and unafraid to throw you in prison. 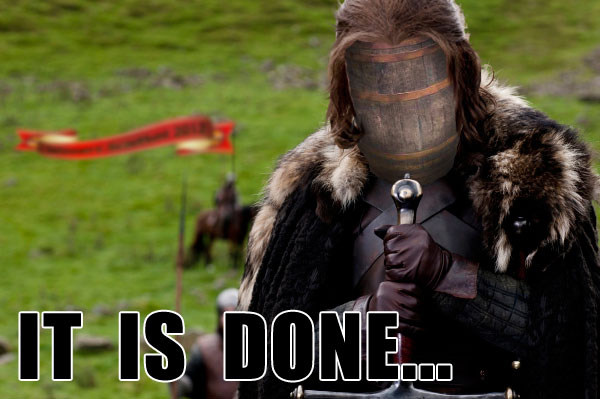 About HR 4771 and the new Designer Steroid / Prohormone Ban

This bill was created "to amend the Controlled Substances Act to more effectively regulate anabolic steroids", and was first introduced by on May 29, 2014 to the US House of Representatives.

The House then passed it on September 15, 2014, and then referred it to the Senate Committee.

On December 11, 2014, the Senate passed it, along with S. 2338, the United States Anti-Doping Agency Reauthorization Act[2], which must go to the House. It's assumed the House will have no problem in passing it quickly.

HR 4771 immediately adds 25 compounds to the Controlled Substances Act (listed below in Appendix I). Of note is Epistane, an extremely popular steroid. Although a big deal, changes like this are frequently worked around.

What's more important is that it adds more blanket coverage of designer steroids, and when combined with the DEA's eventual enforcement, the prohormone game changes forever.

The bill states that any

"drug or hormonal substance (other than estrogens, progestins, corticosteroids, and dehydroepiandrosterone)... derived from, or has a chemical structure substantially similar to, 1 or more anabolic steroids listed in [the new list of banned substances in Appendix I] shall be considered to be an anabolic steroid for the purpose of this Act"

...IF, it's intended to be used or marketed for muscle growth.

In the past, new drugs needed to be chemically similar / related to testosterone to qualify, and the DEA had to prove it was anabolic. This, however, states that if it's marketed as such, and is structurally "similar", then it's game on and game over for the manufacturers and retailers.

There are definitely some compounds in a few gray areas here, so not all is cut and dry, but the simple fact is that more prohormones will be banned than ever before. 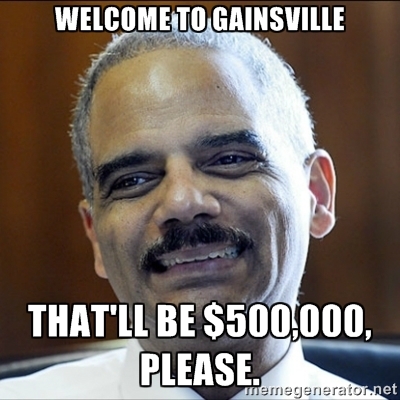 In addition, the end of the bill grants greater powers to the Attorney General, which allows them to issue temporary orders to add more steroids to the list (without a judicial review), which would then take 30 days to take effect. That temporary order can last up to two years long.

Up to a $500,000 Fine for Distribution and Manufacturing

Violators of this new law includes importers, exporters, manufacturers, and distributors, and they may face up to a $500,000 fine - per violation.

$1000 per violation for Retailers

Meanwhile, the retailers who continue to sell/distribute these prohormones to individuals "at a retail level" may be fined up to $1000 per violation. 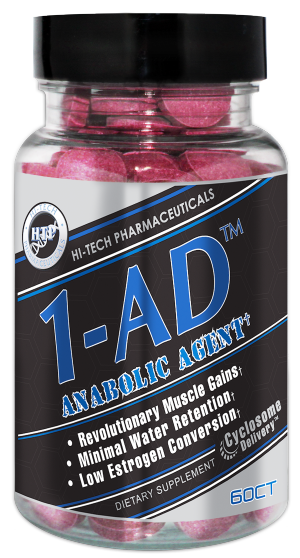 If this is your first time here, PricePlow is a price comparison and consumer advocacy site for nutritional supplements. We traditionally never really listed many prohormones on the site - we knew that this ban would eventually come, and focus more on sports nutrition and protein powders (for instance, see our Top 10 protein powders).

However, with the next wave of legal prohormones out, many in part from Hi-Tech Pharmaceuticals, who are enhancing them with their Cyclosome delivery technology.

The next prohormone to discuss would then be 1-Andro, which takes a two-step conversion to get to 1-testosterone (a prohormone banned in 2004). It's also known as 1-Androsterone and 1-DHEA, amongst other names... and is quite anabolic with a legit human-based research study behind it!

The following steroids / prohormones have be explicitly banned by HR 4771:

The Anabolic to Androgenic Ratio in Steroids / Prohormones

In several of our blog posts about the new legal prohormones available on the market, we discuss the "anabolic to androgenic ratio" as disclosed by Julius Vida's 1969 book titled Androgens and Anabolic Agents, which utilized on the levator ani muscle. 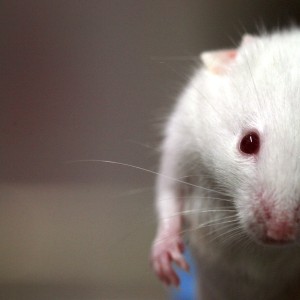 The Levator Ani is a pelvic muscle with an incredibly high number of androgen receptors. In the late 60s, mice were sacrificed to the Gain Gods to see what steroids were most anabolic and least androgenic. Image courtesy Wikimedia.

The 'levator ani' is a muscle found in the pelvis of rodents that's responsible for its tail wagging effect and is noted for being extremely high in androgen receptors, much more so than the prostate. In the early days of anabolic steroid development, scientists were in search for the holy grail of steroids - a steroid with purely anabolic (muscle growing) effects with no androgenic (the negative side effects associated with steroid use - masculinization / virilization in women, acne, androgenic alopecia, prostate enlargement, etc.) effects.

In order to test the effects of which steroids might fit this profile, scientists such as Julius Vida took the testosterone molecule and modified it in every way, shape, and form possible. Since the levator ani muscle was found to have one of the highest concentrations of androgen receptors, it was assumed that this would be a good way to test steroids to determine whether their effect on skeletal muscle growth would be effective. So, a lab rat was administered with a steroid and then sacrificed, and its effects on the levator ani, seminal vesicles, and the ventral prostate were then viewed to determine the effects on each of these organs.

Developing the Anabolic to Androgenic Ratio

In 1969, Julius Vida, an AAS researcher, did the above and tested every known steroid available at that time on both the levator ani muscle as well as the prostate in rats and came up with a scale he called the "anabolic to androgenic ratio". The higher the steroid bound to the levator ani muscle, the higher he rated it on the anabolic scale.[1] Similarly, the lower it bound to the androgen receptor on the prostate and seminal vesicles, he rated it lower on the androgenic scale.

This was meant to show that certain steroids would have more of an anabolic (muscle growing) effect with a lower negative androgenic effect on the prostate -- and would be more suited for future development as a pharmaceutical agent for muscle-saving and muscle-building.

For example, Vida rated testosterone on a scale of 100:100 as testosterone bound to the levator ani muscle as much as it did the prostate. This would be indicative of a "perfect" steroid, but in Vida's mind it was a very rudimentary steroid since it had such negative effects on the prostate.

You can see some tables below, courtesy of Google Books:[1] 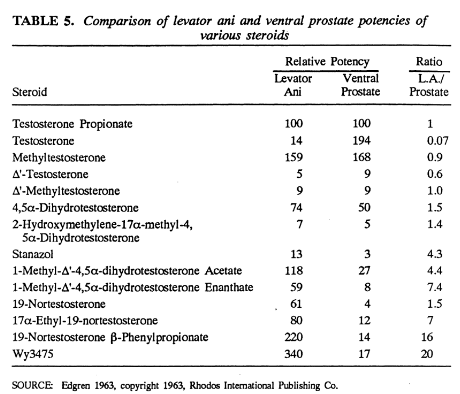 Because of the method Vida came up with, steroid aficionados and marketers of steroids and prohormones have been using this "anabolic to androgenic ratio" scale to market steroids as being exceptionally good. For instance, when 1-testosterone was being sold openly as a designer steroid, marketers advertised it as being "700% more anabolic than testosterone". Obviously, a silly assertion that doesn't make much sense from a pharmacological standpoint, but as a sales pitch, it worked wonders.

So, in essence, when you see someone associate a particular steroids anabolic to androgenic ratio, don't give it too much credence. It is not a true indicator of how much muscle the steroid will add to skeletal muscle, but can demonstrate that is does have positive steroid effects. A good example is how laxogenin is often discussed as having a similar ratio as Anavar (oxandrolone), but we all know that laxogenin is not nearly as strong.

It's still worth noting the number, however, and isn't useless by any means: If the androgenic number is higher than the anabolic number, be forewarned that this compound will be significantly stressful on the prostate and associated with other common androgenic side effects.

So, whatever happened to Vida and his quest for the perfect anabolic steroid with no androgenic effects? Unfortunately, we know today that all anabolic androgenic steroids act upon the androgen receptor without regard for building muscle or having the masculinizing effects steroids produce.

NOTE: Before we start, remember that this product does NOT contain the compound 1-Testosterone. Instead, it uses a clinically-reviewed dose of 1-Andro, which gets converted to 1-Testosterone in...

Hi-Tech Pharmaceuticals Superdrol is the strongest pro hormone on the market! Bodybuilding's Most Anabolically-Potent, Single-Dose Tablet! Formulated with Anabolic & Androgenic Agents, Including...

We have taken our time-tested, unique precursor formula and applied it to 19-NorDHEA, the precursor to 19-Norandrostenediol (19-Nor Andro). Through this channel, Abnormal will deliver that good to...

4 Andro Brutal 4ce (4-DHEA) is a 2-step precursor, first converting to androstenediol, then to androstenedione, and then to testosterone. Conversion often gets interrupted in digestion, so we have...

Blackstone Labs has been continuously populating the supplement industry newswire ever since their partial acquisition by Jared Wheat of Hi-Tech Pharmaceuticals. The edgy BSL isn't content to sit...

Superstol-7: 200mg Epi-Androsterone - Epi-Andro is non-methylated and as a result will put little to no stress on the user’s liver. As a dry compound, users will experience lean muscle gains while...

NOTICE: Before we begin, it's critically important to realize that this product does NOT contain the ingredient 1-AD!! Instead, it contains 1-Andro, which takes a two-step conversion to get to its...

Hi-Tech Pharmaceuticals Dianabol Hi-Tech Dianabol is a powerful combination of precision herbal extracts that trigger your body to build muscle and lose fat. Dianabol's primary role on the Hi-Tech...

At some point or another all guys eventually hit their full natural anabolic potential. There's simply a limit on the amount of pure muscle any given man not blessed with Arnold's genes can put on...

Hi-Tech Pharmaceuticals Dymethazine 90 Tablets | Our Most Powerful Cutting Prohormone If you're looking for the newest & hottest Prohormone supplement on the market, look no further!! Hi-Tech...