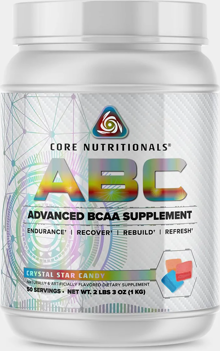 Core ABC is the athlete’s BCAA.

We use the most effective, scientifically-established ratio of BCAAs because we know it’s the difference between your first mile and your last. We include clinically-verified servings of beta-alanine, citrulline malate, and glutamine because we know your last rep depends on it.

Rep by rep. Mile by mile. Breath by breath. Every muscle screams at you with pleas of mercy; every bone aches to its core from the pressure. Yet, you still don’t quit – you push on. By hook, or by crook, you will make it. You will succeed. You will win.
You see, you’re an athlete. You are someone defined to your core by the competitive drive to better yourself at all costs. You need neither trophies, nor accolades; neither cheers, nor recognition. You pay the sweat price for every gain marked in your battle-worn ledger, detailing the struggle your body has endured.

You’re an athlete, and so are we. We don’t make Core ABC for everyone, we make it for you and us. We use the most effective, scientifically-established ratio of BCAAs because we know it’s the difference between your first mile and your last. We include clinically-verified servings of beta-alanine, citrulline malate, and glutamine because we know your last rep depends on it. We know this because we know you, and we know ourselves.

Core ABC is the athlete’s BCAA. It was formulated by athletes, for athletes, for the needs only an athlete can understand. If you can’t say the same about your BCAA, then it may be time for a switch.

If one were to think of the body as a construction project, amino acids would be the most basic building materials: raw lumber, mortar, bricks, and so on. While the assembly of these building blocks is of course critically important to the function of the building – and one of the amino acids, leucine, controls its own assembly – the quality and availability of the materials themselves is arguably more important. Not enough concrete? The foundation cracks and the building falls.

Your body is the exact same way. It is comprised of various amino acids, both essential and non-essential, that comprise the cellular basis of each and every cell in your body. When it comes down to skeletal muscle, the three most important are known as the BCAAs – or branch chained amino acids. Comprised of leucine, isoleucine, and valine, these three little amino acids effectively control the rate at which your muscle grows (hypertrophies), its contractile force, its endurance, and so on – to say they are massively important is an understatement. For this reason, they form the basis of any competently-designed supplement protocol.

Leucine’s insulin-mediated effects are largely the result of its activation of the classical insulin receptor substrate (IRS)/phosphatidylinositol (PI) 3-kinase (PI3K)/Akt/mTOR signal transduction pathway. In this pathway, the bonding of a substrate (glucose) eventually activates a compound known as Akt. Once phosphorylated and activated, Akt signals the release of the famous mammalian target of rapmycin (mTOR). mTOR then increases the translation of muscle-cell ribosomal proteins that increase ribosome biogenesis, which is the literal production of proteins. Leucine has additionally been shown to positively regulate protein synthesis independent of insulin. In certain trials where rapamycin and leucine were co-administered, rapamycin showed only partial inhibition of leucine’s effects on muscle protein synthesis.

In more practical terms, there is a significant body of evidence demonstrating the positive effect of BCAA’s on athletic performance. Extensive studies in exercise-trained populations reveal that, collectively, BCAA’s may:

While products with larger BCAA ratios (ratio of leucine, to isoleucine, to valine) have recently flooded the market, Core Nutritionals has remained with the gold standard of 2:1:1. This decision is made in recognition of the fact that, for all its potential benefits, there is no evidence demonstrating a realized effect of a larger BCAA ratio – and in fact, all the benefits mentioned above derive from evidence using the gold standard 2:1:1 ratio.

Carnosine is a bit of an odd duck: we know that it is crucial for muscle function, and that dietary sources of caronsine are essential, but we don’t know precisely how its working. Moreover, for decades, we had no idea how to increase intramuscular concentrations, as exogenous carnosine sources degraded in the body so fast as to be effectively useless.

Enter beta-alanine. Simply a different iteration of one of the amino acids that comprises carnosine itself (alanine), beta-alanine has proven to be the most effective means of significantly increasing intramuscular concentrations of carnosine – and therefore of promoting all of carnosine’s various beneficial effects on muscle performance. If that weren’t enough, beta-alanine has also demonstrated beneficial physiological effects independent of its parent compound. In order to understand why, though, we need to first understand some of the basic behind carnosine itself.

Carnosine, a cytoplasmic dipeptide synthesized from the precursors L-histidine and l-alanine, is present in high concentrations in skeletal muscle and plays a pivotal role as a, “chemical buffer” in myocytes (muscle cells). It has long been known that carnosine concentrations are highest in glycolytic, rather than oxidative muscle fibers (roughly speaking, explosive vs., endurance muscle fibers, respectively), and thus long hypothesized that this amino acid is required for sustained performance during supramaximal exercise. Recent research demonstrates that carnosine exerts its physiological effects in long hypoxic (low oxygen) drives by functioning as a high-capacity pH buffer in skeletal muscle, preventing the pH ratio of plasma from dropping too low – and therefore preventing crucial pH-dependent processes such as protein synthesis from being inhibited by acidosis.

In simpler language, this essentially means that beta-alanine is a dietary supplement that promotes its own effects in combination with exercise. As you exercise, you simultaneously intensify beta-alanine’s physiological actions – both directly, as well as in the production of intramuscular carnosine. Once ingested, beta-alanine’s exercise-specific beneficial activity is well-established. Elevation of intramuscular caronsine content via beta-alanine supplementation has been show to improve performance in the following ways:

These myriad benefits make beta-alanine both one of the most-studied, and most well-rounded dietary supplements. Beta-alanine not only has direct, actionable physiological effects, but also promotes critical muscle physiologic adaptations that promote its own effects.

Citrulline is a non-essential, non-protein amino acid heavily involved in the urea cycle. Citrulline is also a critical source of endogenous (natural) arginine, as it is rapidly and efficiently converted to arginine in the vascular endothelium and other tissues. Arginine, in turn, is used as the substrate by NOS (nitric oxide synthase) to produce NO, more commonly known as nitric oxide.

Citrulline’s benefits have been shown to be greater than its parent compound. While arginine undergoes direct hepatic (liver) metabolism through the enzyme arginase, citrulline bypasses hepatic metabolism entirely and it is delivered straight to the bloodstream. The result is that gut absorption and plasma (blood) bioavailability studies comparing citrulline and arginine have shown two things. First, that citrulline is less readily destroyed and has greater absorption than arginine. Second, that citrulline supplementation increases arginine levels more effectively than arginine supplementation itself.

This translates to promising results. For example, animal studies show a significant increase in anaerobic performance at a 250mg/kg/day serving of citrulline, while studies in humans implicate citrulline in both aerobic and anaerobic performance increases. As a critical part of the urea cycle, citrulline’s performance benefits are thought to be a result of its role in ammonia clearance. Citrulline is implicated in reducing the oxygen cost of muscle processes, along with increasing the rate of post-exercise ATP and phosphocreatine replenishment. As ATP and phosphocreatine are the body’s ‘exercise fuel,’ this may result in citrulline delaying time to exhaustion in aerobic and anaerobic exercise.

Prior to discussing the physiological effects of glutamine – and more specifically, whether or not it poses any tangible benefits to the proliferation of skeletal muscle tissue – we need to discuss its place in supplementation, in general. Glutamine is perhaps the most lamented of all the amino acids, regularly denigrated to the point that it’s a joke to many athletes. This is largely a problem of perception: glutamine is not, specifically speaking, an anabolic amino acid, and therefore is of little use as it pertains to, “building tissue.” But, “building tissue” is not the only purpose a supplement may have, and the corollary, preserving tissue (or anti-catabolism) is arguably as important. It is in this capacity that glutamine shines, and for this reason it is included in Core ABC.

The literature in this context is encouraging. Various studies demonstrate that glutamine supplementation may suppress or inhibit the action of enzymes known as proteases, responsible for the hydrolytic breakdown of protein and amino acids into smaller compounds. These studies show both site-specific and whole-body reductions in this process known as, “proteolysis” in the later stages of skeletal muscle recovery. While encouraging, these data are perhaps not as promising as glutamine’s more indirect effects on the catabolic process – namely its effect on glucose metabolism. In both in vitro and in vivo trials, glutamine has shown the ability to promote the synthesis and storage of glycogen (glycogenesis), both in concert with an independent of carbohydrate ingestion.

These effects are most pronounced in physiologic situations where carbohydrate metabolism reliant on insulin signaling are compromised – such as the chronic caloric deficits present in a dieting situation. In this context, glutamine may function as a critical addition, potentiating the body’s glycogen synthesis and storage response; maximizing the limited amount of carbohydrates a dieter may be ingesting.