Essential amino acids are important nutrients that must be consumed directly because they cannot be produced naturally by the body. There are nine essential amino acids: histidine, isoleucine, leucine, lysine, methionine, phenylalanine, threonine, tryptophan and valine. These compounds are fundamental components of all of the body's cells, but are particularly needed by the muscles.

What they're used for

Nearly everyone knows that they need to eat protein, but may think of it as a singular thing that is directly used by the body. Protein is actually a complex combination of several types of amino acids, including these nine, plus those that are either not needed on a regular basis, or those that can be synthesized by the body.

Essential amino acids are part of any food that contains protein. But different sources of protein vary in the amount of each essential amino acid they contain. For example, whitefish is much richer in histidine than turkey, but is relatively poor in tryptophan.

Isoleucine, leucine, and valine are known as branched-chain amino acids (BCAAs). These have some specific medical uses as supplements, but are also taken by bodybuilders as a nutritional supplement to reduce catabolism on days of low food intake. They're also taken during workouts to quicken protein uptake.

Muscle protein is the most important protein for athletes. A supplement of whey or soy protein powder that contains branched-chain amino acids (usually along with a mix of other ingredients) is commonly used to extend and improve training regimens, as well as increase athletic endurance.

The lack of even one essential amino acid can inhibit protein processing and lead to muscle breakdown, fatigue, overall weakness, and suppression of the immune system.[1]

Each one also has its own unique benefits:

Histidine is converted by the body to histamine, a powerful vasodilator that plays a role in digestion and central nervous system health. A deficiency in histidine can result in digestive issues, anemia, nerve deafness, hearing loss, and worsen symptoms associated with rheumatoid arthritis.[2,3]

Isoleucine's biggest role is to promote glucose uptake during exercise, but it also aids in muscle protein synthesis (though, to a lesser degree than leucine).[4] Deficiency induces symptoms similar to those of hypoglycemia and hastens the breakdown of muscle tissue.[5]

Leucine is the virtual inverse of isoleucine in terms of benefits. It primarily facilitates muscle protein synthesis, but is also somewhat useful in promoting glucose uptake.[6] Deficieny induces symptoms similar to those of isoleucine.[5]

Lysine plays a key role in calcium absorption and converting fatty acids into energy. Studies also support the idea that it may help to control herpes simplex virus outbreaks.[7,8] Lysine deficiency may contribute to anxiety and stress.[9,10]

Methionine is put to use in repairing and rebuilding kidney cells. A deficiency can lower urine pH balance and promote kidney stones and urinary tract infections.[11] It's also necessary for the formation of a number of compounds, including creatine, taurine, and lecithin.[12]

Threonine plays a major role in supporting the immune system, as well as formation of tooth enamel and collagen.[15]

Tryptophan is a necessary precursor for the production of auxin, niacin, and serotonin.[16] Supplements often promote it as a sleep aid, but evidence of the amino acid directly causing fatigue is not conclusive (drowsiness after eating meats rich in tryptophan may actually be due to seratonin increase from the flood of carbohydrates that usually accompany such meals).[17]

As with the other BCAAs, valine promotes muscle protein synthesis and glucose uptake. But it is also necessary for cognitive and nervous system function and regulation of the immune system.[18]

The World Health Organization (WHO) charts established daily requirements for each of the essential amino acids. See the table below for proper dosing information.[23] 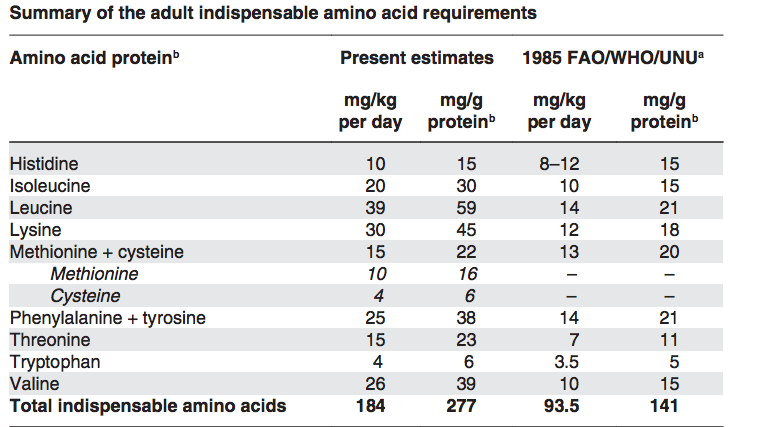 Most of the essential amino acids can be purchased individually as supplements, but the most common form of supplementation for athletes and bodybuilders is the all-inclusive BCAA supplement. At the very least, a BCAA supplement will contain the three branched-chain acids that are most key to muscle development: leucine, isoleucine, and valine.

BCAA supplements are most commonly sold as a powder, but there are a handful of pill and capsule options.

Since essential amino acids are a dietary requirement, they do not cause side effects on their own. Taking very large doses of a BCAA powder can cause gastrointestinal discomfort.[19] People with certain medical conditions should not supplement with BCAA powder (see Warnings below).

Foods that are rich in protein tend to be packed with essential amino acids. Meat, eggs, poultry, and fish contain either all or nearly all of the essential amino acids in one serving. Vegetarians and vegans need to turn to beans to get a similarly rich dose, particularly soy, kidney, and pinto beans. Mixed nuts (five or more types) will also provide nearly all of the essentials. A number of vegetables provide complete proteins, albeit in smaller amounts. Corn, tomatoes, potatoes, green peppers, celery, cucumbers, iceberg lettuce, broccoli, and carrots contain at least a small amount of each of the nine essentials.

Always consult with a doctor before starting a new program of supplementation, or using supplements to ramp up an exercise routine. The FDA does not regulate essential amino acids. While no upper limit for consumption has been established, toxicity is possible in very large amounts.

While most people can consume the amino acids in protein without adverse side effects, supplementation with a BCAA powder or pills is not advised for people with the following conditions: 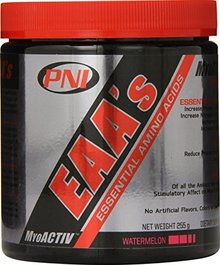 PNI's MyoACTIV EAA has mostly BCAA, but includes the other EAAs as well

Essential amino acids and all-inclusive BCAA supplements can be found right here at PricePlow, and at 30% to 50% off of retail prices to boot. Save on sales tax (where applicable) and let PricePlow find the best price and latest price reductions so you can focus on your workout.

PNI's MyoACTIV EAA's is our preferred product if you're looking for a full spectrum of essential aminos. It provides the three BCAAs in a formula that promotes anabolism and focuses on muscle growth and recovery. It's sold in orange and watermelon flavor.

Cellucor's Alpha Amino focuses on workout recovery and athletic endurance by providing nine micronized essential amino acids along with taurine and chia seed extract, all in a package that is carbohydrate and sugar-free. Also, it comes in a choice of great fruit flavors.

Click the button below to sign up for future Essential Amino Acid news, deals, coupons, and reviews!

Sign up for future Essential Amino Acid deals and coupons!

The Most Advanced Intra Workout Ever Created! Intracell 7 is the ultimate key to crushing through your workouts and reaching your goals. This innovative formula developed by Jerry Ward delivers...

EAminoMax isn’t the same old drab amino acid supplement you’re used to seeing that contains nothing but a pixie-dusting of branched-chain amino acids (BCAAs).* EAminoMax is a comprehensive amino...

To all our soft and chewy candy OG's, the gummy fish G.O.A.T. has arrived in GHOST BCAA. During your workout, throughout the day or before a night out, now you can enjoy the classic SWEDISH FISH...

Primeval EAA Max EAA Max is your anytime, any day, anywhere amino acid supplement to support muscle growth and recovery. Unlike other amino acid products that only contain the three branched-chain...