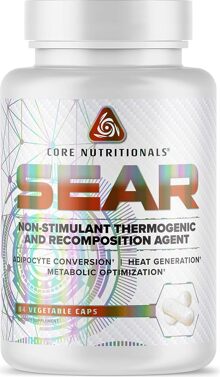 Go to Store
Quick Links to Deal PricesHow does this work and how do stores get listed? See our disclosure below to learn more.
Size
Deal Price
84 Vcaps
$40.00
Go to Store
Go to Store
Compare store prices

Key ingredients in Core SEAR (including NNB Nutrition's MitoBurn) may:

Why do we call it "burning fat"? It is a strange turn of phrase, as the body does not "burn" the adipose tissue (the technical name for "fat"). Of course, heat is involved in the base process of fat metabolism, hydrolysis, but the average person of course does not have this in mind. What the common phrasing captures is that the adipose tissue is now being used for fuel – burned up, as gasoline is burned up in a combustion engine as fuel for the vehicle.

It is precisely this mechanism that Core SEAR affects. There are many pathways to enhance lipolysis, the process by which stored triglycerides – the "stuff" of fat tissue – are broken down to release their potential energy into actual energy. One of the most effective is modulating the enzymes that interconvert WAT (white adipose tissue, which stores energy) to BAT (brown adipose tissue, which releases energy) and the chemical and enzymatic cascades that induce lipolysis.

SEAR addresses both. Sinetrol XPur, a blend of citrus fruit extracts, and MitoBurn, a metabolite of L-valine, have been demonstrated to increase white-to-brown adipose tissue conversion and therefore the resultant energy expenditure increase. Meanwhile, Coleus forskholli and Paradoxine have been shown to heavily influence cellular communication and enzymatic pathways involved in lipolysis, specifically the cAMP and AMPk pathways.

Together, this simple but incredibly powerful formula earns its name: searing white into brown adipose tissue and increasing your body's energy expenditure due to fat metabolism.