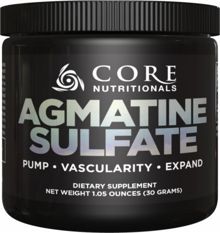 Agmatine Sulfate has been suggested to help:

In need of a pump, but bored of all the standard players? There are only so many variations on arginine, after all. If so, Core Nutritionals has you covered. Agmatine sulfate is one of the most interesting, and coveted, supplements to hit the bodybuilding market in years – but it also comes with a massive, very critical catch. And that’s purity. Not all agmatine sulfate is the same, and the purity can vary wildly from product to product. Core Nutritionals has you covered there, too. (Of course we do!). Our Agmatine sulfate has the highest available purity and is manufactured only according to the strictest standards.

Agmatine is part of a group of compounds known as polyamines, alphatic amines which support multiple physiological roles in tissue growth and differentiation, body weight increments and intracellular signaling. The most well-studied and known polyamines are putrescine (PUT), spermidine (SPD), and spermine (SPM) and agmatine. Agmatine itself is naturally produced in the body by the breakdown of arginine. Paradoxically, the studied effects of agmatine not only appear to mimic those of its parent compound arginine, but in many cases, surpass it. These effects include supporting localized bloodflow (better plasma delivery), dilation of the vasculature (expanding of blood vessels), and increased nutrient delivery.*