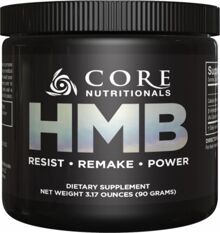 Go to Store
Quick Links to Deal PricesHow does this work and how do stores get listed? See our disclosure below to learn more.
Size
Deal Price
90 Grams
$28.00
Go to Store
Go to Store
Compare store prices

HMB has been shown to:

HMB (otherwise known as β-Hydroxy β-Methylbutyrate) is like the pretty girl who used to sit across from you in biology: sexy, mysterious, but most of all, pretty complex and little understood. And like that girl, the more you actually understand about this fascinating compound, the more you will like it.

HMB burst onto the bodybuilding market in the early 1990’s, and every supplement company and their brother marketed the compound so heavily it gained a reputation as snake oil. The reviews were so varied that HMB was almost relegated to the dustbin of supplement history.

Times have changed, however, and people have once again begun to realize that, when used properly at an effective serving, HMB’s positive contributions to a muscle-sparing environment are impossible to overlook.

HMB (β-Hydroxy β-Methylbutyrate) is an endogenous metabolite of leucine consumption, being derived from its parent amino acid through two steps of enzymatic conversion. In total, approximately 5% of leucine by weight of consumption is converted into HMB.

Once converted, HMB has been demonstrated to possess several interesting effects. In cellular assays, HMB was shown to increase the rate of skeletal protein synthesis through the same mechanism as its parent compound, leucine – the all-important mTOR-P13K pathway that regulates the majority of muscle protein synthesis in vivo. This mechanism has also translated into practical benefits to human muscle, as various trials have demonstrated HMB to slow the rate of skeletal muscle breakdown, increase power output over both acute (short) and chronic (long-term) trials, as well as mitigating muscle damage during high-intensity exercise.