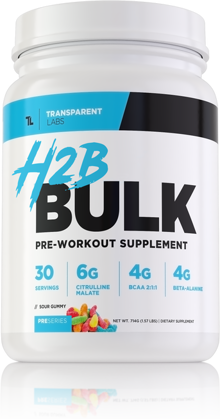 PreSeries HOWTOBEAST BULK — a clinically dosed pre-workout formula made for those who want a hard-hitting, clean burst of energy without feeling jittery or overstimulated. This exclusive rendition of our leading pre-workout supplement — BULK — in collaboration with How to Beast, comes fully loaded with 20+ grams of premium active ingredients per serving to help you pack on lean muscle mass and make every rep count. Experience fuller muscle pumps, improved strength, sustained energy, enhanced focus, and greater anabolic hormone production so you can crush your workouts, day in and day out.

David de las Morenas, AKA How to Beast, has been a partner with Transparent Labs (TL) for years, and his blooming Youtube following has garnered tons of positive feedback on TL products. As such, we both felt it was time David launched a unique flavor of our best-selling pre-workout, Bulk, developed for his audience. David's followers voiced fairly even opinions about natural vs. artificial flavoring and sweeteners. To accommodate his loyal fanbase, Beast Bulk comes in a white bottle (naturally flavored and sweetened version) and black bottle (artificially flavored and sweetened version)

From a performance standpoint, citrulline malate is the “star child” of pre-workout science.

We chose citrulline malate over L-arginine because it provides better absorption, higher plasma arginine levels, and has been found to:

Supplementing with beta-alanine has been proven to increase cellular carnosine levels, which are quickly depleted during intense exercise [28, 29].

A majority of pre-workout supplements contain beta-alanine, but at significantly underdosed levels. Supplementing with proper dosing, as found in PreSeries BULK, is shown to:

Isoleucine is one of the three branched-chain amino acids, which aids metabolism during workout, promotes muscle growth, and executes anti-catabolism effects [48, 49, 50].

Valine, the third branched-chain amino acid, is essential in pre-workout supplementation due to its involvement in metabolism and muscle growth. It also helps to reduce tryptophan build up in the brain during workouts. This allows for greater energy and endurance while working out.

Betaine supplementation has also been shown to:

*(PreSeries BULK does not contain any form of creatine, as caffeine negates its absorption when taken in synchrony)

Additionally, taurine used alongside BCAAs, has been found to reduce next-day muscle soreness more than either taken independently [39].

L-tyrosine is the acetylated version of the amino acid L-tyrosine. The acetylation improves the absorption and effective period of L-tyrosine, as well as optimizes the effectiveness of the energy and focus ingredients in PreSeries BULK.

AlphaSize is a patented form of alpha-glycerylphosphorylcholine (GPC), a highly bioavailable source of choline. Choline is an essential B vitamin that the body uses to create acetylcholine and phosphatidylcholine, both of which play important roles in cognitive function and neurotransmission. Several human studies show that alpha-GPC increases mental performance and physical performance, especially when taken in conjunction with caffeine , . Hence, alpha-GPC has both nootropic and ergogenic properties, making it ideal as a pre-workout ingredient.

L-theanine is an amino acid used by the body. When combined with caffeine, L-theanine demonstrates many benefits for athletes, like:

Caffeine, along with many of the complimenting stimulants and focus-enhancing ingredients in PreSeries BULK are clinically proven to reduce the sensation of effort. Approximately 180 mg of caffeine has been found and confirmed to significantly increase repetitions to failure and readiness to invest effort in athletes [7, 8].

Moderate doses of caffeine have also been found to not negatively interfere with natural thermoregulation like higher (300 mg+) caffeine-infused pre workouts do [9].

Theobromine is the primary alkaloid found in cocoa beans, and is essentially the “little brother” of caffeine. Its functions in the body are suggested to be complementary to those of caffeine, acting as a phosphodiesterase inhibitor and central nervous system stimulant (4). Research has also found that theobromine has differential contributions to mood and cognitive function when compared to caffeine, providing further insight into the distinct, yet synergistic nature of these naturally occurring stimulants (5).

Infinergy is a trademarked caffeine salt of malic acid (dicaffeine malate) that was created to prolong the ergogenic effects of caffeine. Rather than the abbreviated “high” and subsequent crash people often experience after drinking a large cup of coffee, Infinergy provides a smoother and longer-lasting increase in mental performance and thermogenesis, all without the jitters and crashing from ordinary caffeine.

AstraGin is a novel extract of Astragalus membranaceus and Panax notoginseng — two adaptogenic herbs will longstanding history in traditional Chinese medicine . The constituents in these plants are suggested to selectively enhance the absorption of biomolecules by increasing intestinal permeability .

Q: How should PreSeries BULK be taken to maximize its effectiveness?

Q: How does PreSeries BULK compare to other pre-workouts?

A: Back in 2014 we set out to make the best pre-workout supplement, regardless of price, without the artificial nasty ingredients so common in packaged goods. We wanted something WE would be comfortable taking daily, and confident that it would get the job done. If you want to see how we compare PreSeries BULK to other well rated pre-workouts, check out our best pre-workout blog post here.

Q: I am subjected to drug testing for my sport, can I take PreSeries Pre-Workout?

A: Large doses of caffeine negates the ergogenic effects of creatine. PreSeries BULK contains 180 mg of caffeine anhydrous. If you're looking, specifically, for a pre-workout solution that includes creatine, we highly recommend taking a look at our PreSeries STIM-FREE.

Q: What is the difference between PreSeries BULK, PreSeries LEAN, and PreSeries STIM-FREE?

Q: I don't live in the United States, can I still buy PreSeries BULK?

Q: Does Transparent Labs ship to my Country?