Eating fish (or supplementing with fish oil) has traditionally been the only means of directly obtaining the beneficial omega-3 fatty acids, eicosapentaenoic acid (EPA) and docosahexaenoic acid (DHA). Potent anti-inflammatory agents, EPA and DHA improve cardiovascular health and ease arthritis symptoms, among a number of other health benefits.

Fish accrue these fatty acids in their tissue over time by eating smaller fish and crustaceans, such as krill. In recent years, supplement manufacturers have begun harvesting krill oil directly as an alternative source of these omega-3s.

Krill oil is believed to be different from standard fish oil in that the EPA and DHA are bonded in such a way that, theoretically, they may be taken up more efficiently by the body. Krill oil also contains the antioxidant astaxanthin, which provides its own range of health benefits. Finally, there is a belief that since krill oil is harvested from the deep ocean, there is less of a chance of it containing toxins like polychlorinated biphenyl, popularly known as PCBs, and mercury, a metal that can be dangerous in high doses.[1]

EPA is used by the body to control inflammation and plays a role in central nervous system functioning. DHA is a basic component of a number of parts of the body, including the brain, skin, and retina of the eyes. However, supplementation with EPA and DHA is often due to a wide range of perceived benefits, from improved heart health to the promotion of cognitive function. 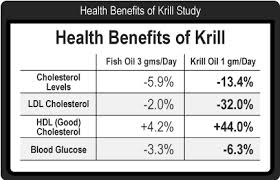 Most benefits associated with krill oil overlap with those of standard fish oil since the primary health benefit comes from EPA and DHA intake.

As krill oil is a relatively new product, there is far less body of scientific study compared to ordinary fish oil (the effects of which have been studied for decades). However, there have been several recent studies that indicate krill oil may have particular benefits.

A 2004 study published in Alternative Medicine Review indicates that a dose of 1g to 3g daily increases HDL (good cholesterol) levels while also significantly decreasing LDL (bad cholesterol) and triglycerides.[2] A 2007 study published in the Journal of the American College of Nutrition indicates that 300mg of krill oil daily significantly reduced reported pain and stiffness scores in arthritis sufferers after a period of 7 to 14 days of regular supplementation.[3] Another Alternative Medicine Review study, published in 2003, indicates that krill oil performs better in managing premenstrual symptoms than an equivalent amount of standard omega-3 fish oil.[4] 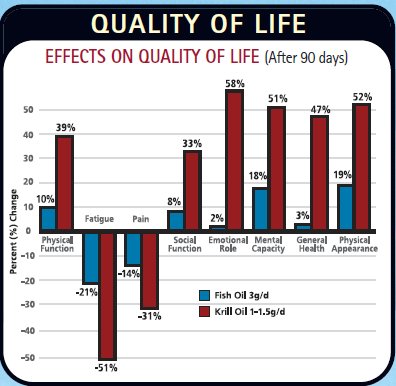 Results from a small handful of studies indicate that krill oil may be better in certain circumstances than standard fish oil. The cholesterol study, mentioned previously,[2] also saw improved results in the reduction of glucose, triglycerides, and LDL levels versus patients who took equal doses of ordinary fish oil. Another study found that krill oil was slightly better at improving arthritis conditions in rats compared to fish oil.[7]

The chart at right shows the results of a 2003 study of the effectiveness of krill oil in managing premenstrual syndrome and dysmenorrhea, as opposed to a larger daily dose of fish oil.[4] Patients taking krill oil reported significant improvement in all symptoms.

While these results are promising, more studies are necessary before anyone can conclusively declare krill oil is better for these conditions than a standard fish oil.

Krill oil is not regulated by the Food and Drug Administration (FDA) and does not have a recommended daily allowance (RDA). The positive results in medical studies were seen in the range of 300mg to 3000mg (3g) per day. Supplement manufacturers tend to recommend a dose of 500mg per day for most uses.

Krill oil is almost universally sold in gel cap form. Doses are usually 300mg to 500mg per cap. While you can find it in liquid and powder form, the range of options is much more limited, and generally only available for sale in bulk.

Only one manufacturer, Azantis Inc., currently sells it as a liquid. Typically, krill oil powder is only sold in larger quantities, but two Norwegian companies, Aker BioMarine ASA and Olympic Seafood AS, have been marketing krill powder in capsule form since 2012.[5, 6]

Derived from a natural food source, krill oil has little in the way of potentially dangerous side effects, unless you have an allergy to shellfish. Most side effects are cosmetic or minor irritants, similar to those of fish oil — gastrointestinal discomfort, loose stools, and an unpleasant fishy flavor or odor.

Krill oil's biggest disadvantage relative to standard fish oil is the price — it can run two to three times as expensive. Krill costs more to process because they start decomposing almost immediately, unless frozen (as opposed to fish, which can be stored at low refrigeration temperatures for up to two days before oxidation occurs). Most krill are harvested from Antarctic waters and must be frozen on site, or kept alive in water tanks during transport.

Depending on what you're taking the oil for, that extra cost may not be merited as there is no hard evidence that krill oil provides any more cardiovascular or anti-inflammatory benefit than standard fish oil. The claim that krill oil is more "pure" than similar products is irrelevant as even moderate quality fish oil is filtered for mercury and PCBs (manufacturers will usually make this clear on the label). 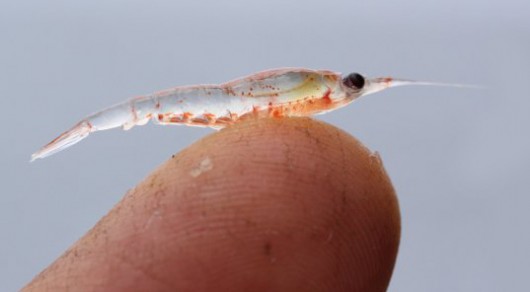 Krill oil can only be consumed directly by eating krill. EPA and DHA are also found in the tissue of oily fish such as salmon, cod, sardines, and mackerel. Krill is not as widely available as these other oily fish because it takes on an unpalatable flavor when frozen.

The body is also able to synthesize DHA and EPA from alpha-linoleic acid, found in many different types of food.

Always consult with a doctor before beginning any new program of supplementation. The FDA does not regulate krill oil and no daily recommended allowance or upper limits of tolerance have been established.

Though there has been no direct scientific study on the negative impacts of krill oil on any particular conditions, if you are in the following circumstances, it is wise to avoid it as a precaution:

We prefer brands that include EPA and DHA amounts, typically prominently featured on the label.

You can purchase krill oil right here at PricePlow and cut your costs by saving 30% to 50% off retail prices — not to mention sales tax! PricePlow takes the stress out of comparison shopping so you can focus on staying healthy.

Note that we prefer brands that include EPA and DHA amounts, typically prominently featured on the label.

Real Krill - Enhanced with DHA & EPA Description from Doctor's Best In this product, the superior bioactivity of krill omega-3 DHA and EPA as phospholipids is augmented by DHA and EPA from fish....

Enhanced Krill plus Omega3s with Superba Krill In this product, the superior bioactivity of krill omega-3 DHA and EPA as phospholipids is augmented by DHA and EPA from fish . These vital lipids...

Krill Oil Description from Jarrow Krill Oil is a low temperature extract of the abundant Antarctic krill (Euphausia superba) and it contains unique phospholipids rich in Omega-3 PUFAs (EPA and...

Krill & CoQ10 Description from Now NOW Krill & CoQ10 Softgels combine two of the most prominent and effective nutrients for cardiovascular health in one convenient supplement. CoQ10 is a...

Krill Oil, 60 Softgels, From LabradaKrill Oil 60 Softgels Krill are small semi-translucent crustaceans that live in the depths of the ocean. They...

Krill Oil (500mg) Overview Body First’s Neptune Krill Oil is rich in the omega-3 fatty acids EPA and DHA. It is also a natural source of the powerful antioxidant astaxanthin. Krill Oil has...

KRILL OIL BENEFITS If you want to optimize how you move, how you think, or your overall vitality, you should consider Krill oil. Krill oil contains essential fatty acids like DHA and EPA that your...