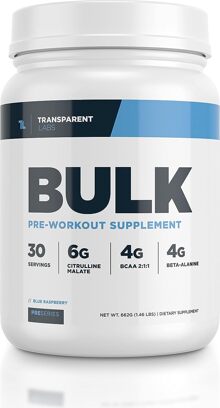 Go to Store
Quick Links to Deal PricesHow does this work and how do stores get listed? See our disclosure below to learn more.
Select Variation(s):
Size
Deal Price
30 Servings
$42.50
Go to Store
Go to Store
Compare store prices

This open-label, top naturally-flavored/sweetened pre workout is all the rage in 2016, and PricePlow has the best PreSeries Bulk Coupon on the web! Just click one of the "Go to Store" buttons to see it and read more on our in-depth PreSeries Bulk blog post and review!

PreSeries BULK was developed for a specific purpose - to be the most exceptional "bulking" pre-workout supplement available. The key ingredients, all backed by published scientific research, are included at clinically effective dosages and contain zero colored dyes, unnecessary fillers, or harmful additives.

With 100% formula transparency and a potent Testosterone Support complex (vitamin D3, boron, and zinc), PreSeries BULK is most effective for serious athletes and bodybuilders looking to gain size and increase muscle mass.

There's a reason why PreSeries BULK comes in jumbo-sized jugs! Each serving exceeds 22 grams and includes 20 active ingredients that are designed to increase nitric oxide ("pump") and focus while working out, reduce fatigue and muscle soreness, all while enhancing overall physical performance.

From a performance standpoint, citrulline malate is the "star child" of pre-workout science.

We chose citrulline malate over L-arginine because it provides better absorption, higher plasma arginine levels, and has been found to:

Supplementing with beta-alanine has been proven to increase cellular carnosine levels, which are quickly depleted during intense exercise [28, 29].

A majority of pre-workout supplements contain beta-alanine, but at significantly underdosed levels. Supplementing with proper dosing, as found in PreSeries BULK, is shown to:

Isoleucine is one of the three branched-chain amino acids, which aids metabolism during workout, promotes muscle growth, and executes anti-catabolism effects [48, 49, 50].

Valine, the third branched-chain amino acid, is essential in pre-workout supplementation due to its involvement in metabolism and muscle growth. It also helps to reduce tryptophan build up in the brain during workouts. This allows for greater energy and endurance while working out.

Betaine supplementation has also been shown to:

*(PreSeries BULK does not contain any form of creatine, as caffeine negates its absorption when taken in synchrony)

Additionally, taurine used alongside BCAAs, has been found to reduce next-day muscle soreness more than either taken independently [39].

N-acetyl L-tyrosine is the acetylated version of the amino acid L-tyrosine. The acetylation improves the absorption and effective period of L-tyrosine, as well as optimizes the effectiveness of the energy and focus ingredients in PreSeries BULK.

Choline supplementation aids in regular intense training by maintaining acetylcholine levels for neural signaling, as well as participating in the BMHT pathway to covert homocysteine to methionine during prolonged sessions [41].

L-theanine is an amino acid used by the body for the regulation of the neurotransmitter dopamine. When combined with caffeine, L-theanine demonstrates many benefits for athletes, like:

Caffeine, along with many of the complimenting stimulants and focus-enhancing ingredients in PreSeries BULK are clinically proven to reduce the sensation of effort. Approximately 180 mg of caffeine has been found and confirmed to significantly increase repetitions to failure and readiness to invest effort in athletes [7, 8].

Moderate doses of caffeine have also been found to not negatively interfere with natural thermoregulation like higher (300 mg+) caffeine-infused pre workouts do [9].

Once in the body, citrulline malate is converted to arginine, which is then protected from in vivo arginase by L-norvaline, providing a stronger and longer NOS response.

Supplementation with synephrine has been found to raise resting metabolic rate by 65 kcal [11]. This is the result of increased lipolysis (fat burning) and produces stimulatory effects that increase energy, athletic activity, motivation, and cognitive function [12] [13].

Hordenine is found naturally in select plants and fruits. Supplementing with hordenine, alongside synephrine, has been found to increase energy and metabolism.

Hordenine is similar in structure to ephedra, but unlike other adrenergic aminos, hordenine is metabolized primarily by monoamine oxidase B (MAOB, as opposed to MAOA); which avoids hypertensive events [10].

Bioperine is an extract obtained from the black pepper fruit. In its patented form, BioPerine has been clinically tested (in the United States) to significantly enhance the bioavailability of various supplement nutrients through increased absorption.

PreSeries BULK, which is designed specifically for athletes and bodybuilders undergoing a "bulk phase" includes a unique Testosterone Support blend of Vitamin D3, Boron, and Zinc.

Zinc supplementation is essential to any aggressive athlete and contributes to a strong immune system, maximal testosterone production, and extensive enzymatic processes.

Sufficient zinc intake supports healthy food cravings, while zinc deficiencies have been associated with lack of hunger [44]. Overwhelming evidence has suggested a relationship between zinc supplementation and maximal testosterone levels in men [45, 46, 47].

*Note: We cannot ship to Mexico or Norway

Q: How should PreSeries BULK be taken to maximize its effectiveness?

Q: I am subjected to drug testing for my sport, can I take PreSeries Pre-Workout?

A: Large doses of caffeine negates the ergogenic effects of creatine. PreSeries BULK contains 180 mg of caffeine anhydrous. If you're looking, specifically, for a pre-workout solution that includes creatine, we highly recommend taking a look at our PreSeries STIM-FREE.

Q: What is the difference between PreSeries BULK, PreSeries LEAN, and PreSeries STIM-FREE?

Q: I don't live in the United States, can I still buy PreSeries BULK?