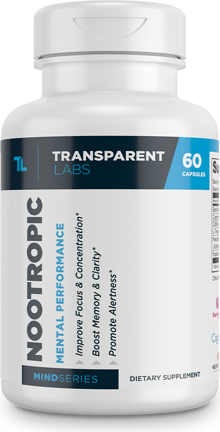 Transparent Labs Nootropic Capsules are the ultimate mental performance-enhancing supplement. We meticulously formulated this nootropic supplement with proven ingredients such as Cognizin, SerinAid, and NeuroFactor that work synergistically to fortify your mental performance, support healthy mood, and enhance resilience to stress. Harness the power of your brain firing on all cylinders each and every day.

Want to learn more about the benefits of Nootropics? Click here for more info.

Directions: As a dietary supplement, take 2 capsules daily with 8 oz of water.

L-theanine is an amino acid used by the body. When combined with caffeine, L-theanine demonstrates many benefits for athletes, like:


SerinAid is the purest and most potent phosphatidylserine ingredient on the market, derived exclusively from plant sources. Phosphatidylserine is an important phospholipid that protects neurons and glial cells in the brain and also acts as a cellular signaling molecule for keeping the mind sharp.[1] Human studies have shown that subjects taking 300 - 500 mg of phosphatidylserine generally felt less stressed and had a better mood than those taking a placebo.[2],[3] It’s suggested that this is the result of lower cortisol response to stress after taking phosphatidylserine.[4]

Choline is an essential B vitamin that is becoming increasingly scarce in the modern human diet.[5] It plays a vital role in acetylcholine synthesis, a key neurotransmitter that governs cognitive function and promotes mental acuity when handling tasks that demand sharp focus and concentration.[6]

Cognizin is patented CDP-choline (citicoline) - the industry’s gold standard form of supplemental choline. While you can find many nootropic supplements with choline, they almost always contain choline bitartrate - a form which has negligible impact on choline levels in the brain.[7] On the contrary, a recent human clinical trial found that subjects given a CDP-choline supplement experienced a two-fold increase in plasma levels of both choline and uridine for upwards of 10 hours.[8]

NeuroFactor Coffeeberry Extract is a trademarked ultra-pure whole coffee fruit concentrate on featuring unmatched antioxidant capacity and nootropic chlorogenic acids validated by clinical trials in healthy human subjects.[10] A recent study published in the British Journal of Nutrition found that subjects given NeuroFactor Coffeeberry Extract had greater than 140% increases in brain-derived neurotrophic factor (BDNF) after just one hour, indicating a rapid onset of neuroprotective actions.[11] BDNF is a key peptide that acts on neurons throughout the central nervous system to promote growth and myelination, thereby supporting memory, focus, and mental acuity.[12]

Huperzine A is an alkaloid constituent found in the clubmoss Huperzia serrata, which has been used in traditional Chinese medicine for ages as a “mind enhancer.”[13] Huperzine A supports cognitive function and memory by inhibiting acetylcholinesterase, the enzyme responsible for breaking down acetylcholine.[14] Hence, huperzine A is the perfect complement to ingredients like citicoline and caffeine for boosting mental performance.

Bioperine is an extract obtained from the black pepper fruit. In its patented form, BioPerine has been clinically tested (in the United States) to significantly enhance the bioavailability of various supplement nutrients through increased absorption.

Q: I don’t live in the United States; can I still buy MindSeries Nootropic?

A: Yes. Our fulfillment center allows us to ship worldwide. Standard shipping for international orders can take up to 10-14 business days.

Q: Does Transparent Labs ship to my Country?