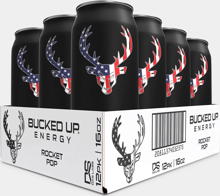 Go to Store
Quick Links to Deal PricesHow does this work and how do stores get listed? See our disclosure below to learn more.
Select Variation(s):
Size
Deal Price
12 Cans
$23.99
Go to Store
1 Can
$3.99
Go to Store
Go to Store
Compare store prices
See all DAS Labs Products on PricePlow
Ingredients

Energy you can feel. When you feel it, you’ll know. You just got BUCKED UP.

We aren’t them. We didn’t start with soda. We’ve never dumped caffeine into something and tried passing it off as an “energy” drink. Because we know energy. Real energy

BUCKED UP Energy is blended with the devil you know -- 300mg of natural caffeine in our Original Formula (black can) or 100mg in our NEW Low Stim Formula (white can) -- as well as game-changers the other guys haven’t even heard of. Dynamine and TeaCrine to provide time-released, longer-lasting energy. Nootropics Alpha GPC and Huperzine-A to boost your brain. And of course, Beta-Alanine -- to tell your body it’s time to work. Or party. You decide.*

The other guys are still stuck in the past. They make overhyped soda for the extreme athletes, the rockstars, the gym bros who like caffeine with their vodka, lambo lovers, and old guys who confuse misogyny with marketing.

We get it. We love most of those things too. But who said the rest of us don’t need energy?