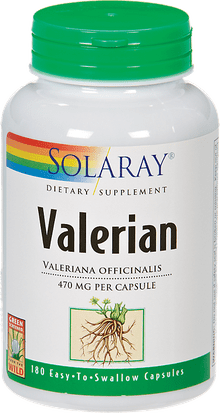 Go to Store
Quick Links to Deal PricesHow does this work and how do stores get listed? See our disclosure below to learn more.
Size
Deal Price
60 Capsules
$3.13
Go to Store
100 Capsules
$5.23
Go to Store
Go to Store
Compare store prices
See all Solaray Products on PricePlow
Ingredients

For a host of medical problems, including digestive problems, nausea, liver problems, and even urinary tract disorders!

Although valerian grows wild all over Europe, most of the valerian used for medicinal extracts is cultivated. The root is used.

The Greek physician Dioscorides recommended valerian for a host of medical problems, including digestive problems, nausea, liver problems, and even urinary tract disorders. Use of valerian for insomnia and nervous conditions has been common for many centuries. By the eighteenth century, it was an accepted sedative and was also used for nervous disorders associated with a restless digestive tract.

Valerian root contains many different constituents, including essential oils that appear to contribute to the sedating properties of the herb. Central nervous system sedation is regulated by receptors in the brain known as GABA-A receptors. Valerian may weakly bind to these receptors to exert a sedating action. This might explain why valerian can help some people deal with stress more effectively.

Double blind studies have repeatedly found that valerian is more effective than placebo and as effective as standard sleep medications for people with insomnia. Generally, valerian makes sleep more restful as well as making the transition to sleep easier, but does not tend to increase total time slept, according to these studies. Combining lemon balm and hops with valerian did not make it any more effective in another double blind study involving people with difficulty sleeping.

How much is usually taken? For insomnia, some doctors of natural medicine suggest 300-500 mg of concentrated valerian root herbal extract (standardized to no less than 0.5% essential oils) in capsules or tablets thirty to sixty minutes before bedtime. As an alcohol-based tincture, 5 ml can be taken before bedtime. Combination products with lemon balm, hops, passion flower, and scullcap can also be used. Children aged six to twelve often respond to half the adult dose.

Are there any side effects or interactions? Recent research indicates that valerian does not impair ability to drive or operate machinery. Valerian does not lead to addiction or dependence. Valerian is not contraindicated during pregnancy or lactation. SOLARAY VALERIAN ROOT EXTRACT 50MG