Iron is an essential mineral that is required for manufacturing red blood cells. All cells contain iron.

Iron is part of proteins -- mostly in hemoglobin, the pigment in red blood cells, and to a smaller degree, muscle myoglobin -- that carry oxygen throughout the body. Iron is also in enzymes that are necessary for a variety of bodily functions.

Note that the following table is not the recommended supplement dosage, but a total daily dietary allowance. If you are not meeting your recommended daily allowance (RDA), you can talk to your doctor about supplementation.

This table is based on Institute of Medicine recommendations. 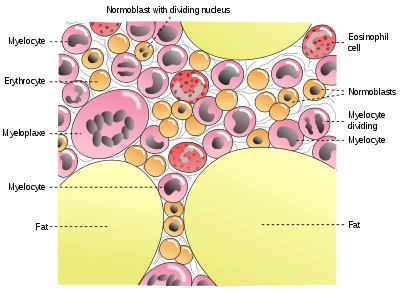 There are two types of iron.

On average, healthy adults absorb about 10% to 15% of iron from their diet. However, how much iron your body absorbs from the foodsyou eat depends on storage levels (when your iron stores are low, there is a boost in absorption) and the type of iron you take in.[1]

Take note that the more iron you consume at one time, the less it is absorbed. So be sure to spread out your prescribed supplemental iron doses evenlythroughout the day. 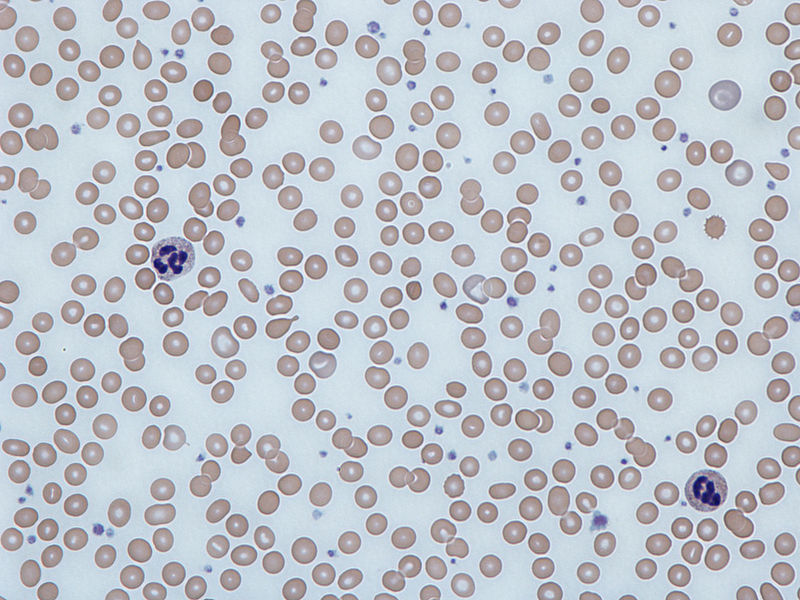 Iron deficiencymeans there is too little iron in the body, whiletoxicity means there's too much. Both conditions can lead to health problems.

Iron deficiency is one of the most common nutritional disorders in the U.S.

Up to 80% of humans worldwide are thought to be iron deficient, which occurs over time. At this point, iron stores are used toprovide needed iron, so hemoglobin is not affected.

Iron deficiency anemia, estimated to affect 30% of humans, occurs when iron stores are depleted and blood iron levels can't fulfill the need. With this condition, hemoglobin levels drop below normal.

In the U.S., anemia is caused primarily by iron deficiency.

If you have too little vitamin A, which helps move iron out of storage, it might appear that you have a deficiency becauseiron levels in hemoglobin dwindle, but iron stores actually stay constant. Vitamin A deficiency is uncommon in the United States, but it is an issue indeveloping countries.

Having too little iron in the blood leads to a shortage of oxygen in the cells, which can: 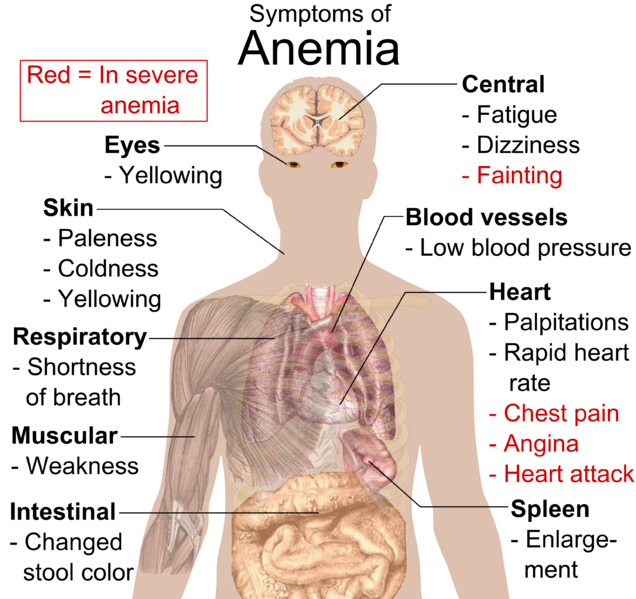 Supplements can help restore iron stores and build up hemoglobin, but it's best to get iron from your diet. Your doctor can test your serum ferritin level (stored iron), hemoglobin levels, and hematocrit (the percentage of red blood cells) to detect possible deficiency. Bone marrow iron levels may be tested as well.

These are only a few tests your doctor may order. Treatingiron deficiency anemia could take up to six months.

Having too much iron in the blood can lead to toxicity and death. There is a high risk of toxicity because iron sticks around in the body and can build up in tissues and organs if storage areas are maxxed out.

Taking 75mg of supplemental iron may increase your risk for toxicity. Children and adults with hemachromatosis (causes your body to absorb too much iron) are at especially at risk of iron toxicity.

Men, postmenopausal women, and people with blood disorders who get frequent transfusions generally do not need iron supplements. They are more at risk for iron build up. Check with your healthcare provider before taking iron supplements.

Who is at risk

Endurance athletes may get sports anemia, which involves ferritin and hemoglobin dilution during training. Studies are inconclusive regardingwhether or not strength and endurance training requires iron supplementation.[6]

Iron deficiency can be a problem for athletes who don't get proper amounts of iron. Joggers, cyclists, and competitive swimmers may have loweriron levels due to gastrointestinal blood loss and high red blood cell turnover. Runners particularly may experience ruptured red blood cells in the feet.

It's not clear if iron deficiency without anemia will affect performance the same as iron deficiencyanemia. Boosting iron intake by 30% over general population amounts is recommended for these groups to help avoid healthand performance problems. The increase for runners is estimated at 70%.[1, 3, 5, 6, 7]

Evidence is mixed regarding the effect of iron supplements on exercise performance. According to one study, the need for micronutrients due to exercise isn't clear, andsupplementation doesn't boost performance, while others state that there is evidence that supplementation improves performance, work capacity, iron levels,muscle fatigue, and endurance in iron-deficient athletes.[5, 6]

Athletes that follow restrictive, unbalanced, or low-iron diets, or try to lose weight by extraordinary means may be lacking in micronutrients,including iron. Growth spurts, high altitude training, sweating, elimination, frequent blood donation and injury could alsocontribute to iron loss and possible deficiency. A supplement may be appropriate.

Periodic iron level checks are recommended for these populations.

In women, anemia is defined as hemoglobin of less than 120g per liter. In men, it's less than 130g perliter.[12] Chances of developing anemia increases in seniors. Age and general health status are factors. Women are more apt to develop the condition before age 75 while the risk for men tends to increase after age 75. And the risk increases significantly for men and women after age 85.[11]

Anemia isn't a natural part of growing older. It is often a side effect or symptom of a more serious health problem, such as:

The most common signs of anemia in seniors isconjunctival pallor or pale mucous membranes that line the inner eye lid and exposed part of the eyeball. Older people mayalso show signs of an anemia-related complications, such as cognitive problems, dizziness, apathy, and aggravated congestive heart failure. Chronic infections, osteoarthritis, leukemia, and acute hepatitis can also cause anemia.[12]

Babies are born with enough iron to last up to six months. Breastfeeding provides additional iron, but if that is not an option for you, talk toyour pediatrician about iron supplements or iron-fortified formula.

Adolescentsin general may become iron deficient because of picky eating habits and growth spurts. Teen girls who heavily menstruate and forego iron-rich food sourcesmay also be at higher risk of developing a deficiency.

Adding iron to your child's diet

Safety concerns and side effects

We believe in low prices here at PricePlow. Iron supplements have been around long enough and are simple enough to manufacture that they should not cost a lot. Review our price comparisons below.

Nature Made: Just What You Need | .com Nature Made Multi Complete with Iron Description Made With D3 With Iron 23 Key Nutrients For Daily Nutritional Support Gluten Free USP Dietary Supplement...

Easy Iron (25mg) Description from Country Life An advanced iron supplement that contains Ferrochel, a type of iron that is non-constipating and gentle on the stomach....

IRON IS ESSENTIAL FOR THE FORMATION OF RED BLOOD CELLS.

Nature's Way Energizing Iron 90 Softgels | Red Blood Cell Support Iron is a mineral which is essential to our bodies and which aids in the transportation of oxygen throughout the body. Without...

Almost two-thirds of the body's iron is found in hemoglobin, the protein in red blood cells that carries oxygen to cells. A necessary trace element, iron is vital for producing...

Energizing Iron Description from Nature's Way Why use an iron supplement?Iron is an essential mineral that transports oxygen throughout the body. Without it, your body can't get enough oxygen, and...

Iron Food Complex Description from New Chapter To deliver the full profile of Nature's bounty to you, each nutrient in Iron Food Complex is cultured in live probiotics. Those are the healthy...

Iron Food Complex Description from New Chapter To deliver the full profile of Nature's bounty to you, each nutrient in Iron Food Complex is cultured in live probiotics. Those are the healthy...

New Chapter, Iron, Food Complex, 60 Vegetarian TabletsCertified B CorpMade with Organic Vegetables and HerbsICSWhole-Food Fermented Iron and Supporting Nutrients for Blood HealthCan Be Taken on an...