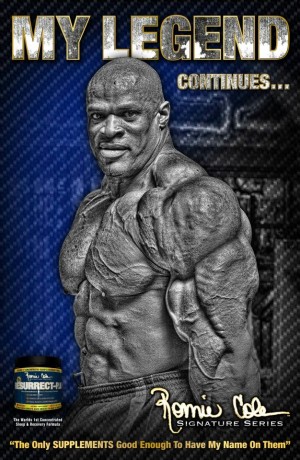 The Ronnie Coleman Signature Series is one of the hottest supplement lines on the market today. The supplements were truly created by the inspiring Ronnie Dean Coleman, one of two people to hold a total 8 wins in Mr. Olympia competitions. Not only that, he also holds 26 IFBB wins, beating Vince Taylor’s 22 wins.

He started his path to fitness as a GSU Tigers middle linebacker at then coach Eddie Robinson. Upon graduation, Ronnie became a police officer in Arlington, Texas.

Unlike other "celebrity" brands, this one is actually very legit. We're huge fans of two products in particular: the nighttime GH-boosting formula, Resurrect-PM, and the pure whey protein isolate product, IsoTropic Max, but the entire line is of high quality. Every product brings a few new things to the table, and that's why we like it.

How Ronnie got into Bodybuilding

Ronnie’s path to bodybuilding, however, was set by his fellow officer Gustavo Arlotta who encouraged him to attend the Metroflex gym owned by Brian Dobson, an amateur bodybuilder. Seeing the potential in Ronnie, Dobson gave him a free lifetime membership if Ronnie consented to be trained for the Mr. Texas bodybuilding competition to be held that year.

After being trained, Ronnie easily owned first place in the Mr. Texas competition for titles heavy weight and overall categories. He also managed to beat the Dobson during the said competition. In his first professional competitions, the Canada Pro Cup, he won two years in a row. He also snatched 1st place in the 1997 Russian Grand Prix

Right after his wins in 1995, Ronnie was immediately signed up for many product endorsements in his professional career as a bodybuilder. This meant a lot of travel all over the world. He has been to places such as China, Brazil and Australia. He also appeared at many gym openings across USA.

However, what made Ronnie different was his remarkable physique in spite of his busy schedule. He managed to snag 8 straight Mr. Olympia wins while maintaining a busy schedule of product endorsements and promotion.

The Possible Conception of the Ronnie Coleman Signature Series

Now Ronnie shares his secrets with the Ronnie Coleman Signature series. One particular supplement was created in part of his experience on the road. Sleep was a luxury and he made sure he got quality sleep even though it was only for 2 to 4 four hours a day. He used several nutritional sources that he now bequeaths to would be bodybuilders in the form of Resurrect PM.

The rest of his supplements were also created due to the "market gaps" found throughout his vast career experience. The other part, of course, was researching the efficacy of the ingredients of the Ronnie Coleman Signature Series.

Ronnie believed that through hard work, he could make the best supplement line ever. Part of the success of his product line is SensaCool, a revolutionary flavor technology that he created by himself. It can be found in nearly every supplement of the Signature Series. It improves the taste of several supplements, which helps increas the already booming popularity of Ronnie’s supplements.

Each supplement also has proprietary blends of ingredients that he trused throughout his career spanning 8 straight Mr. Olympia wins. Still, he had the ingredients tested and researched to verify their efficacy, proving that Ronnie isn't just about the buck but also about the quality and giving fans and customers the best supplement line ever.

It’s not easy to endorse products. You can’t just sign up your name to a brand for fear of being dragged down if anything wrong happens. However, if you trust a brand, endorsing it is a pleasure. The Ronnie Coleman Signature Series found proud endorsers such as Shawn Rhoden and Zhang Hong Yu.

Overall, Ronnie’s Signature Series proves to be a great supplement line worth the buck. In only 2 years it has managed to reach the popularity of most supplement companies to date through many solid reviews from satisfied customers.

Sign up for future Ronnie Coleman deals and coupons!

Whey XS Ronnie Coleman Signature Series Whey XS is changing the protein game by bringing you a delicious high-quality whey protein powder at an affordable price. Everyone knows that protein is...

For the past decade, one man has dominated the Mr. Olympia competition. 8 years in a row, Ronnie Coleman has proven that with a great...

The Difference Look, there are a lot of Thermogenic products out there and a lot of good ones to be honest. However, they only target fat...

The Difference "When I first came out with MYO-BLITZ, I wanted to create a pre-workout that performed and gave you a solid energy without any jitters....

The Difference At some point during everyone's workout they hit this proverbial "wall" and are faced with a familiar decision... turn around and go home or run right through...

Steal a bit of Ronnie's Legendary Pumps in Every Capsule!

In the gym, how do you stack up against other guys? There will always be guys with the perfect genes that seem to have the perfect delts or...

If you really want maximum strength and awesome physique, you've got to bump up your testosterone levels. Injecting yourself with synthetics isn't safe, and you don't have to go through that to...

The Difference Glutamine is the most abundant amino acid in muscle tissue and plays a key role in many bodily functions. Studies suggest that glutamine...