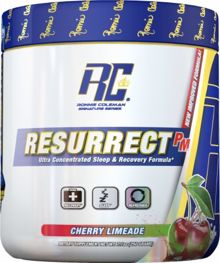 Go to Store
Quick Links to Deal PricesHow does this work and how do stores get listed? See our disclosure below to learn more.
Select Variation(s):
Size
Deal Price
25 Servings
$33.95
Go to Store
Go to Store
Compare store prices
See all Ronnie Coleman Products on PricePlow
Ingredients

In fact, he's always had trouble sleeping, even when winning bodybuilding championship after championship.

Winner of eight Mr. Olympia titles, proves that sleep is possible even for the busiest guy on the planet. His secret in a bottle, Resurrect PM, can help you rise from even the busiest days and hardest workouts.

Bodybuilding is like a chair with three legs. You need all three if you want the right balance. The first leg is about the right nutrition. The second is the right workout. Finally, the third leg is about rest and relaxation.

Sleep is when your growth hormones are firing and helping your body grow, repair, and recover. But you can do even better - take certain amino acids like those that are in Resurrect PM, and naturally boost HGH production even more, while they help you sleep deeply too!

R&R is Important for Growth!

Sleep is still an important part of a healthy bodybuilding regimen. Many complain that they don't really get that much sleep with work, taking care of kids, or joining competitions.

It's a question that Ronnie struggled with for years. His journey to winning 8 straight Mr. Olympia titles meant he had to travel a lot, spend time with his family, workout and still maintain his nutrition. His secret was the quality of sleep he got. And that means REM sleep or "rapid eye movement" sleep.

Finally, Ronnie shares his secret formula to getting deep REM sleep. It's a special formulation of the ingredients he took during the height of his career. Resurrect PM is guaranteed to help your body achieve quality sleep for great muscular gains.

Consider sleeping on an 8 hour plane ride. You'll might remember finding out that on touchdown, you were still just as sleepy as you were before the flight. That's because the sleep you got wasn't REM sleep. It's the stage of sleep that allows dreaming while completely relaxing your muscles.

REM sleep is also one of the two states of sleep where the body produces more growth hormone. You can now achieve this with the help of Ronnie's Resurrect PM.

The Ingredients of Good Sleep in One Bottle 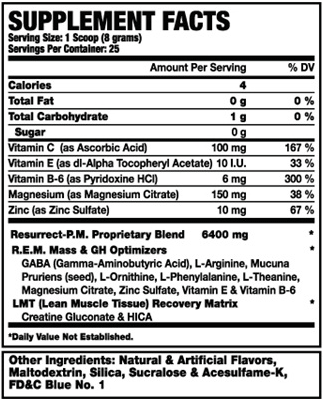 Instead of worrying where to get the ingredients that Ronnie took while winning 8 straight Mr. Olympia titles, he's now giving bodybuilders, athletes and health enthusiasts his secret. Each bottle of Resurrect PM contains the following:

The main stars of this proprietary blend are GABA and Mucuna Pruriens. They both have a profound effect on sleep. In several studies, GABA helped put test subjects into restful sleep. The rest of the ingredients support GABA such as Theanin. L-Theanin is one of the few "antidotes" of caffeine induced insomnia. Overall, this mix is a powerful one and guaruantees rest and relaxation once it enters your body.

Since its release, it has garnered many positive reviews. It simply tastes great, and that's just a nice thing to have before bed.

The ingredients of Resurrect PM helped many customers get quality sleep and even help banish over-sleeping! 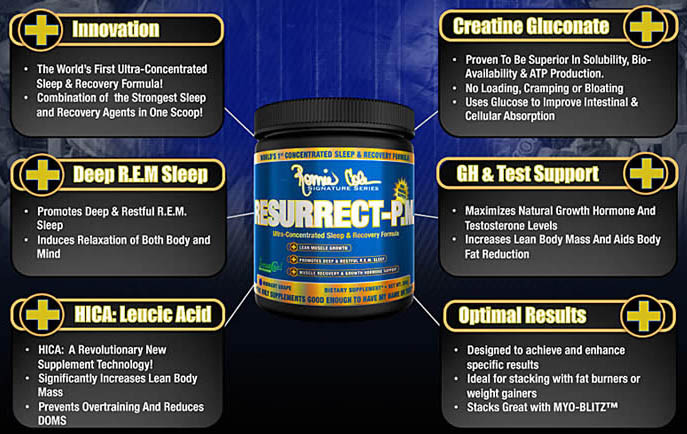 Benefits of Sleep, Rest and Relaxation

Adults may smirk at the little kids during nap times but it's the kids that get the last laugh as they experience growth spurts. Kids do get quality sleep, after all, they don't deal with daily stress on the job and being the bread winner of the family. Resurrect PM can help you get that sleep and retain some of the growth spurt.

Cortisol is the enemy of many bodybuilders. It's responsible for destroying muscles or something called muscle atrophy. However with quality sleep, you can reduce Cortisol levels naturally.

It's no secret, quality sleep can help boost growth hormones. We're talking about REM sleep here, something that Resurrect PM is going to give you.

Lastly, sleep also helps cells grow by optimizing nutrients for cell division. It's during at rest when the majority of resources are diverted to repair and growth. It's during this time that you gain/grow new muscle cells!

You can count jumping sheep or drink buckets of warm milk and still be awake. Or you can take Ronnie Coleman's Resurrect PM for that quality sleep that counts. 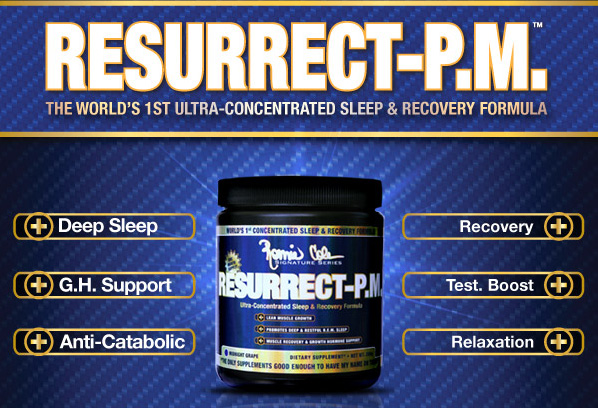