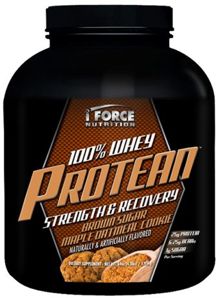 Go to Store
Quick Links to Deal PricesHow does this work and how do stores get listed? See our disclosure below to learn more.
Select Variation(s):
Size
Deal Price
4 Lbs.
$57.00
Go to Store
Go to Store
Compare store prices

iForce Protean is currently a featured product for two reasons: 1. Protean tastes great; and 2. We have an incredible deal - 4lbs for $22 with free shipping! Get on it ASAP!

Versatility. In humans, versatility refers to the capability to adapt to different situations. Your body needs high performing, lean muscle powered with the best nutrition and high quality amino acids in order to build muscle proteins. Amino acids, which iForce Nutrition are focused with their amazing protein supplement, Protean.

iForce Nutrition Protean is an incredible mix of protein sources that gives you a quick burst of amino acids followed by a slow release designed to fuel your body for the next eight hours!

While each protein source has several benefits, they also have some disadvantages. Protean blasts the disadvantages away by mixing them together.

Made from curds or whey separated from milk, whey protein isolate gives you a higher concentration of amino acids, especially leucine, and other branched chain amino acids. These are not just amino acids that become muscle proteins, the amino acids themselves trigger the growth phase of muscles!

Whey protein isolate has a medium range of bioavailability, which means it is dissolved and absorbed possibly two to three hours after ingestion.

It contains the same amount of proteins as whey protein isolate. However, the addition of enzymes partially digests the proteins and break them up into smaller chains, such as amino acids.

It's an expensive process but you can't expect anything less from iForce Nutrition. Protean will give you an amazing amino acid burst within minutes of ingestion with Whey Protein Hydrolysate.

A good protein supplement should also be a great source of energy. You can't just rely on proteins for energy; you need them to build muscle!

Concentrates have a lower protein level than isolates but it packs a lot of energy in the form of complex carbohydrates and milk fat! The complex carbs provide quick bursts of energy while the milk fat burns slowly and even converts into growth hormones. Whey Protein Concentrate packs energy and muscle-building amino acids at the same time.

Whey is only 20% of milk and sometimes might not cover all the essential amino acids. With milk protein isolate, casein and whey are used so you're assured a greater source of amino acids.

It is a unique molecular form of casein. The amazing thing with micellar casein is that it forms a large curd in the stomach, which helps speed digestion and forms various peptides. The peptides themselves provide a variety of benefits, from antibacterial, high calcium and phosphorous bioavailability and appetite suppression. This makes micellar casein in protean a great protein source that aids in fat loss.

These ingredients help prevent clumping. The also make protean mix well with water and other beverages.

Protein supplements no longer have to taste like chalk. After months on the market, reviews of Protean are in and it's a hit! Consumers can't get enough of these great flavors:

They taste so good and the variety of flavors can spice up your workouts. You should see different Protean reviews; there are heated debates about the best flavor! Red velvet cake is winning by a hair followed by vanilla mint swirl.

However lovers of Protean flavors chocolate truffle, strawberry creamsicle and vanilla cupcake batter aren't backing down either. Or you could do what one Protean reviewer suggested, mix and match the flavors and get an all new uniquely flavored Protean shake!

More flavors to come! Keep on checking iForce Nutrition and your favorite stores for limited edition flavors. Save the trouble and bookmark this page for quick access to important news about Protean.

Who should buy protean?

iForce Nutrition made a top quality protein supplement but they can't please everybody. Protean provides a great source of proteins and energy and it's great for people who want to bulk up and support the energy they get from pre-workout supplements.

Still, some Protean reviews talk about how a 34 g scoop has only 20 g of protein. The remaining grams are composed of complex carbs and beneficial fat to provide energy. This just means that those who are on a diet might not appreciate the protein supplement.

iForce Nutrition has a great product. Those who are on a bulking diet or want to trigger muscle mass gains will find Protean a great ally and important supplement in their stacks.