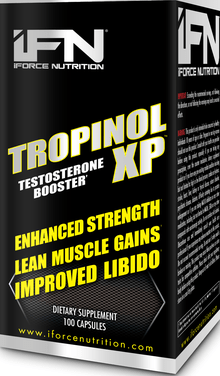 Go to Store
Quick Links to Deal PricesHow does this work and how do stores get listed? See our disclosure below to learn more.
Size
Deal Price
100 Capsules
$49.95
Go to Store
Go to Store
Compare store prices

The expert formulators at iForce have just released a brand new version of their popular test booster with an all new formula and better ingredients. The new formula contains some little known ingredients that have the potential to provide great results. It also represents a typically unheard of price drop over its predecessor.

This is a near complete makeover of the formula with many new ingredients, and just the venerable Vitamin D3 remaining.

As a result, we've got lots of ground to cover in explaining why Tropinol XP is right for you: You're about to see why this product goes way beyond a test booster and is one of the best muscle-building products on the market today.

The new product is a 583mg per serving proprietary blend consisting of three sub-blends:

The 'Testosterone Amplification Matrix' which consists of:

Ultimately there are a number of great testosterone boosting and anabolic ingredients in this product. It is a MASSIVE improvement on its predecessor and this product is WAY more than just a test booster, and iForce is probably selling themselves short on their marketing. This product contains a smorgasbord of beneficial compounds that will result in:

Many of these effects should be noticeable acutely from the very first dose. Find this supplement, and try it. Maybe it will temper your disappointment in other companies and their 'revolutionary' anabolic supplements that turn out to be garbage.

If you want to give Tropinol XP a try, just take a look at the price comparison on this page and you'll be able to find the best price at an online store. Online stores are always cheaper than buying at brick and mortar stores because there is way less overhead involved with running an online store.