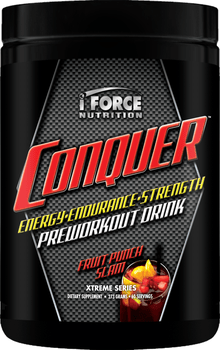 Conquer is a brand new preworkout from the experts at iForce. Touted as a replacement of their ' Maximize Intense' preworkout product, the formula is quite similar.

However there are some key upgrades to the stimulant blend that make this an improvement to the usability of the already effective Maximize product. iForce took the already-rock-solid Maximize Intense formula to a whole new level... and that's saying something, since Maximize was a damn good preworkout in the first place.

The overall ingredient list is identical to Maximize intense.

The changes we're interested in are all in the 'Energy & Adrenaline Release Matrix'.

The rest of the product remains the same as the formula in Maximize Intense.

An 'Intense Volumization and Strength Matrix'

Conquer kept all of the proven exercise enhancers contained in Maximize and significantly improves their stimulant blend with this release. This is everything that a product refresh should be and shows their confidence in their formula compared to the near complete overhauls many competing products receive when they redo products. The bottom line is, If you liked Maximize Intense, then you will certainly like this product even more

Directions and Dosage for use

Always consult your doctor before beginning any dietary supplement. The dosing recommendations for Conquer haven't been released yet, but it will probably be to start with 1 scoop and gradually increase to 3 scoops if necessary. This is a VERY potent stimulant heavy product so you will want to heed the start small warnings and work your way up gradually. There was actually a number of maximize reviews that talked about the product being too stimulant heavy so please, for your adrenals sake, pay attention to scoop warnings.

If you want to give Conquer a try when it comes out, just take a look at the price comparison on this page and you'll be able to find the best price at an online store. Online stores are almost always cheaper than buying at brick and mortar stores because there is way less overhead involved with running an online store.