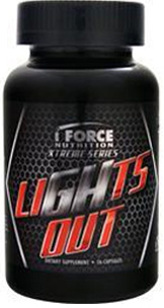 iForce LiGHts Out
Go to Store

Go to Store
Quick Links to Deal PricesHow does this work and how do stores get listed? See our disclosure below to learn more.
Size
Deal Price
56 Capsules
$31.25
Go to Store
Go to Store
Compare store prices

iForce LiGHts Out
Go to Store

LigGHts Out is a combination HGH booster and sleep aid made bythe experts at iForce Nutrition. HGH plays a vital role inregulating a massive amount of body processes, from building muscle,to increasing bone density, strengthening the immune system, burningfat, and many more.

The issue is, thedirect use of HGH for athletic purposes is not approved by the FDA,and that’s where HGH boosting supplements come into play -- byattempting to increase your body's natural production of HGH.

iForce also realizedthat HGH release in the body is at peak levels during deep sleep,so they decided to include ingredients that promote restful sleepto maximize the benefits you’ll get from the supplement.

There are just three ingredients in the product, none of which areblended, so we have the advantage of knowing exactly how muchof each ingredient we’re getting.

5-HTP is a precursor to the hormone serotonin. It increasesserotonin potently and is the go to standard in clinical trials bywhich to compare the effectiveness of other serotonin inducingdrugs.

Thismeans that while you will still see positive effects but they aresomewhat limited by each others presence.

Ultimately, the product should be somewhat effective as a sleep aid,and can be made more effective by supplementing with melatonin. As an HGH booster, it can have some effects, mostly in olderathletes (aged 30+) where HGH levels are on the decline.

Normally Works Best if You're 30 or Older

Enhancing HGHlevels within natural limits is not likely to result in verysignificant effects in younger athletes, excepting cases ofdeficiency.

However, once you turn 30, you will begin to loveproducts like this one - iForce has a great formula here.

If you want to give Lights Out a try after reviewing the potentialeffects, just take a look at the price comparison on this page andyou’ll be able to find the best price at an online store. Onlinestores are always cheaper than buying at brick and mortar storesbecause there is way less overhead involved with running an onlinestore.