Comprising 40% of the human brain's polyunsaturated fats, and 60% of the retina's, DHA is essential for neuronal development and the maintenance of proper brain function. In fact, reduced blood plasma omega-3 levels are found in Alzheimer's disease, Parkinson's disease, ADHD, and depression.

These discoveries have catalyzed a massive interest in omega-3 within the scientific community. Several studies suggest that supplementation of these good fats can improve your health and protect you from disease in the future.

The most common source of DHA comes from fish -- or fish oil -- which contains EPA, DHA, DPA, and ALA, usually in concentration of this sequential order.

This article will focus on the function of DHA in the human body and the benefits afforded by adding DHA to your daily diet.

This article focuses on the benefits of supplemental DHA for adults in general. (By the way, recent evidence suggests that pregnant women consume an average of 80mg per day, while the FDA suggests a minimum of 300mg per day).

Research demonstrates that reduced DHA intake correlates with an increased risk of various cancers, and supplementation may reduce your susceptibility to cancer. 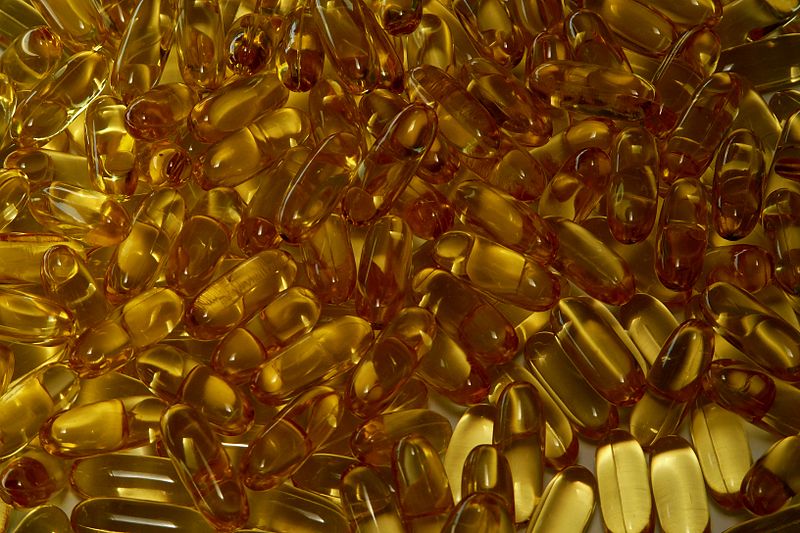 This is the fourth most common cancer among women. A study published in 2012 by researchers at the Yale School of Public Health found that women with high intake of DHA have a 36% reduced risk of endometrial cancer compared to women with low intakes. And consumption of fish is not required for benefits. "Fish oil supplement usage was associated with significantly lower risks of endometrial cancer ranging from 26% to 48% lower."[1]

A 2012 Japanese study concluded, "those in the highest quintiles with respect to intakes of EPA, DPA and DHA exhibited lowered risks of liver cancer by 44%, 36%, and 29%."[2]

In a massive study of more than 35,000 post-menopausal women, regular consumption of fish oil containing DHA and EPA "was associated with a 32% reduction in breast cancer as compared to non-users."[3]

Though formerly thought to be important primarily for brain development, DHA is proven to enhance aspects of cognition for all ages. 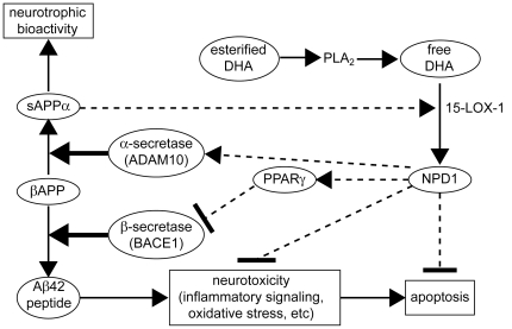 A memory study analyzed the effects of a DHA-rich supplement versus placebo on 176 healthy adults, ages 18 to 45. After six months, researchers subjected participants to a battery of memory tests. Among the DHA group, significant improvements were found with reaction time, episodic memory, and working memory.[5]

A high dietary intake of DHA is associated with a considerably reduced prevalence of dementia, "and a significantly reduced risk of having Alzheimer's disease."[6]

DHA supplementation (usually combined with EPA) can be extremely beneficial to the cardiovascular system by:

In one study, DHA supplementation (along with EPA) dramatically increased muscle synthesis in an elderly population (average age, 71 years) via a "significantly increased...response to amino acid and insulin infusion such that the fractional muscle protein synthesis rate was increased by 71%."

The researchers went on to conclude that, although perhaps not as intensely, similar effects could be expected for persons of any age.[12]

After aerobic exercise, fish oil supplementation has been shown to, "reduce fasting blood plasma triglyceride levels by 14% overall in contrast to the control (sunflower oil) groups where no such lowering was observed," and confer 4% more fat loss than control groups.[13]

Though this section is more controversial, preliminary and human trials have shown reduced levels of DHA in persons with depression, dementia, psychosis, anger, and ADHD. The results of supplementation have been conflicting and incomplete, with some suggesting benefits and others showing little benefit compared to control groups. Obviously, this is a subject that demands more research.

How DHA works in the brain 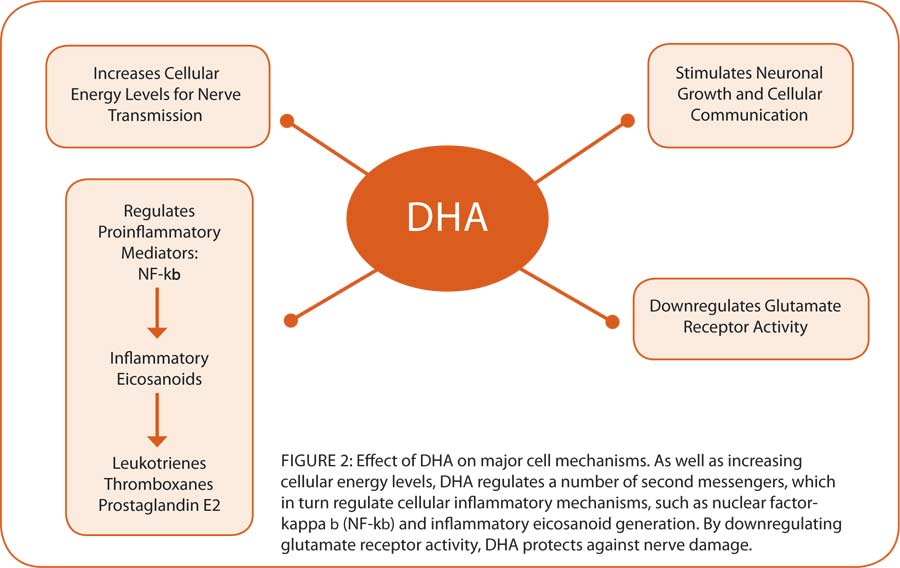 How it works in the brain

Every cell in your body is contained within a wall of lipid molecules (fat) punctuated with functional proteins, otherwise known as the lipid bilayer. This system provides control over what enters and exits (endocytosis and exocytosis) the cell, and permits communication with other cells. When unsaturated fats compose the lipid bilayer, the cell becomes more permeable, allowing nutrients, oxygen, hormones, and many other molecules to more readily enter the cell.

In the brain, communication is key. DHA, the primary unsaturated fat in the nervous system, is essential for allowing neurons within the brain to communicate, accept communications, and receive necessary nutrients.

It's important to understand that this cellular exterior is very fluid, moving and interchanging lipids constantly. So, in theory, if we maintain a healthy ratio of unsaturated fats, these cells will communicate more efficiently (due to the constant supply of good fat), resulting in a healthier brain.

Also, a permeable cell membrane allows the cell to more efficiently remove waste products, such as advanced glycation end-products (AGEs) and amyloid proteins (implicated in Alzheimer's disease). In fact, there's evidence that diets rich in saturated fats are correlated with an increased risk for Alzheimer's disease.[19]

Why we need it

In the human body, DHA is also synthesized from consumption of alpha linoleic acid (ALA is a common short-chain fatty acid derived from plant fats and animals). But synthesis is paltry at best.[21]

The average American diet is deficient in DHA, so unless you eat fish on a daily basis, you're likely depriving your body of this essential fat.

For a period of time, essential fatty acids, such as DHA, were classified as vitamin F. But since they're required in massive quantities, they were discarded from this nomenclature. Regardless, think of DHA as an essential vitamin -- one that the average American is severely lacking.

ALA is a great omega-3 supplement with its own effects, but if you are on a budget and forced to choose only one essential fatty acid, it should be the Docosahexaenoic acid based products on this page. End of story.

For the purpose of optimal health and cardiovascular maintenance, the suggested daily consumption for DHA and EPA should be at least .3% of total energy for a 2000-calorie diet. That's about 220mg per day of DHA. Many human studies use upwards of 200mg per day with no apparent ill effect.

An average serving of cold water oily fish contains anywhere from 200mg to 2000mg of omega-3 fatty acids, with approximately half being DHA. So there's little cause for concern with ingesting large quantities of DHA.[14, 15]

According to the FDA, up to 3000mg per day of DHA/EPA from all sources (diet and supplements) is generally considered safe for most adults.[17]

The fish most with the highest concentrations of DHA are listed below:

Additional non-fish based sources include:

As always, these statements have not been approved by the Food and Drug Administration, does not constitute medical advice and you should always consult your doctor before starting a new supplement, drug, or exercise regimen.

Side effects and drug interactions

Use caution if you're prescribed blood-thinning medications, such as aspirin or warfarin. Fish oil interferes with blood clotting and could enhance the effects.

Fish, along with fish oil (the main source of DHA), is susceptible to the accumulation of heavy metals and fat-soluble pollutants. Ensure that you are taking a quality supplement that indicates proper purification methods.

As an alternative (though generally more expensive), newer omega-3 supplements produced from micro-algae oil have a lower risk of pollutant exposure.[18]

On this page, we show price comparisons for supplements that are marketed as high-DHA products. Due to its importance, we typically recommend you stick with the products suggested here. If you want an all-around omega-3 product, however, see our omega-3 page, which will have several products that may have higher quantities of EPA.

We also have a separate fish oil page. Fish oil is a relatively vague term, however. It's important to see the specific dosages of fatty acids to ensure that you're getting a quality product rather than low-quality oil extracted from any random fish. 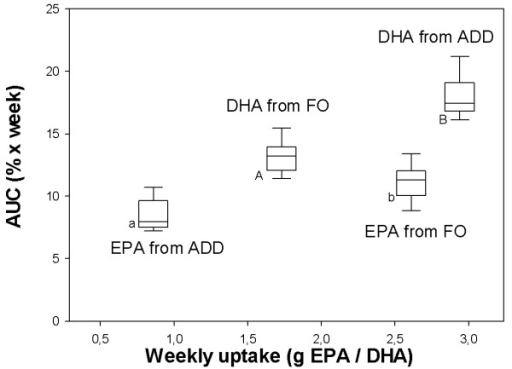 For cognitive enhancement, DHA will stack with nearly anything. Many people claim that it (along with EPA) can synergize by increasing the potency of nootropics -- products that help improve brain performance and focus.

For cardiovascular health, one very interesting stack is combining fish oil (containing DHA) with a low-dose aspirin, possibly multiplying the protective effects of both on their own. This stack relies on reducing pro-inflammatory prostaglandin synthesis with aspirin, and promoting the less inflammatory synthesis with fish oil.

As little as 20mg to 30mg per day of aspirin is suggested. The best approach is to consume 1/4 of a baby aspirin tablet along with regular fish oil supplementation.[20]

Once again, we are not doctors. These recommendations have not been approved by the FDA. You must speak with your doctor and get written consent before making changes to your supplementation regimen.

Calamari DHA Omega-3 with Calamarine Description from Doctor's Best DHA (DocosaHexaenoic Acid, Omega-3) is a building block for the cell membranes that manage many vital processes, such as...

Important For Healthy Skin And Hair!

The myth that all fats are bad for you has been dispelled due to research into Omega-3 and other essential fatty acids. This combination of essential fatty...

About this item VEGAN DHA FOR BRAIN & EYE HEALTH: When it comes to Vegan Omega 3 DHA supplements, ours is premium; Minami Algae Omega-3 provides 500mg of plant based marine Omega 3 DHA from Algae...

DEVA Vegan Omega-3 DHA is a quality product derived from algae and packaged in non-animal softgels made from carrageenan and starch. This makes an excellent alternative to fish oil...

Garden of Life Ocean’s MOM Prenatal DHA 30 Soft Gels What does every expecting mother want for their unborn child? A happy healthy baby of course! Garden of Life offers a complete prenatal vitamin...

Mega-DHA Description from Nature's Way Mega-DHA is the premier fish oil source of DHA - an essential fatty acid for healthy mental and visual function. DHA is also essential to proper eye and...