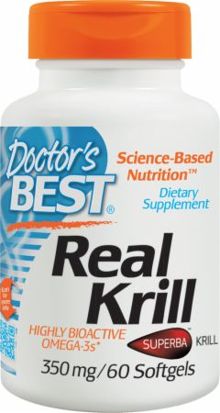 Go to Store
Quick Links to Deal PricesHow does this work and how do stores get listed? See our disclosure below to learn more.
Size
Deal Price
60 Softgels
$10.62
Go to Store
Go to Store
Compare store prices
See all Doctor's Best Products on PricePlow
Ingredients

Best Real Krill is a 100 percent authentic dietary supplement, a lipid nutrient complex sustainably harvested from the Antarctic Krill, Euphausia superba. Krill are shrimp-like ocean creatures (Crustaceans) that feed exclusively on algae, the primary producers in the marine food chain. Antarctic krill are so abundant they could be the largest single species mass on the planet.1

Krill thrive in the frigid Antarctic seas due to their ample content of the long-chain omega-3 fatty acids DHA (DocosaHexaenoic Acid) and EPA (EicosaPentaenoic Acid). By remaining fluid at temperatures way below freezing, these vital lipid nutrients assist krill to routinely survive, feed and reproduce.

Krill oil is sometimes compared to fish oil as an omega-3 dietary supplement. But authentic krill oil complex contains a greater range of nutrients, and its benefits far exceed those of fish oils. Most of the DHA and EPA of krill oil occurs linked into larger phospholipid molecules (pronounced fos-fo-lip-ids).2 These are preformed building blocks for the cell membranes that drive life processes. In fish oil, by contrast, all the DHA and EPA occurs as triglycerides, which are storage forms of fatty acids (“fat”). The DHA and EPA has to be removed from the triglycerides, then linked into phospholipids prior to inserting them into cell membranes.

In a large proportion of women, premenstrual problems affect life quality by negatively affecting mood and other mental states and by generating discomfort. In a double blind trial, krill oil was compared against fish oil for reducing minor premenstrual complaints.4* Seventy (70) women of childbearing age consumed 2 grams of either a krill oil or a fish oil, daily for the first month. Then for the next 2 months, they took the assigned supplements for just eight days prior to menstruation and another 2 days subsequent, and filled in detailed questionnaires.

After the first 45 days the women taking krill oil had significant improvements in all 10 complaints, including irritability, gloom, stress, and “feelings of being overwhelmed.”4 The physical premenstrual complaints that improved included breast tenderness, weight gain, abdominal discomfort, swelling, and bloating.* Those taking fish oil reported improvements in just 2 physical complaints—weight gain and premenstrual abdominal discomfort. From day 45 to day 90 all the krill oil benefits were sustained while the fish oil group only received additional relief of swelling.*

The women taking krill oil also avoided the unpleasant reflux regurgitation experienced by two-thirds of the women who took the fish oil.

Maintaining healthy blood lipids is important not only for cardiovascular health, but also for maintaining memory with age.5,6 In a randomized clinical trial, 120 men and women received either krill oil, fish oil or a placebo for 90 days.7 The krill oil dosages ranged from 1-3 grams per day and were tailored to body mass index (BMI); the fish oil dosage was 3 grams per day. The trial went for 90 days.

In a double blind trial, 90 subjects were randomized to receive either krill oil (300 mg per day) or a placebo.8They were assessed at baseline, then after 7, 14 and 30 days. By day 30, support for joint health was reported, versus no joint support in the placebo group.*

Every cell has a membrane system that performs most of the necessary life processes.9 Membranes are thin, interconnecting molecular sheets that define the cell’s outer border and extend into the cell interior. The membrane’s foundation or matrix consists mostly of phospholipids with fatty acids attached (DHA and EPA, for example). Numerous catalytic proteins are inserted into this matrix, and these must be free to move, which requires the matrix be semi-fluid. The omega-3 phospholipids of krill provide this natural fluidizing effect.*

For humans as well as for krill, omega-3 phospholipids are natural cell membrane fluidizers. They also drive metabolism: since fluidity facilitates the membrane proteins, the higher the omega-3 phospholipid content in a membrane the higher its metabolic activity.10 PhosphatidylCholine (PC) is the most common phospholipid in all human cells,9 and krill oil complex is an excellent dietary source of omega-3 PC carrying DHA and EPA.

Fish stocks worldwide are threatened with depletion, due to unsustainable fishing practices.11 Krill stocks are not. A visionary international cooperation begun in 1982 continues to ensure that Antarctic krill harvesting remains sustainable. In that year the CCAMLR, the Convention on the Conservation of Antarctic Marine Living Resources, was founded as a multinational organization to exclusively set and regulate “precautionary” catch quotas for the krill and other Antarctic fisheries.12

Fish oils are a popular dietary supplement category, yet they do not predictably help maintain already healthy cholesterol levels,7 nor do they consistently benefit mood management as seen in the premenstrual trial.4Krill oil provides a broader spectrum of benefits than does fish oil, and at much lower daily intakes.*