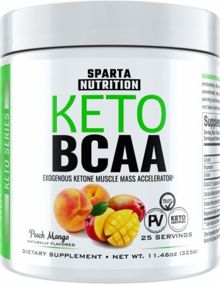 Go to Store
Quick Links to Deal PricesHow does this work and how do stores get listed? See our disclosure below to learn more.
Size
Deal Price
25 Servings
Buy 1 Get 1 FREE
$14.99
BOGO
Go to Store
Go to Store
Compare store prices

Sparta Nutrition has been blowing out the keto scene, releasing a bevy of BHB-laden supplements to enhance everything from fat burning (Keto Shred) to brain function (CogniKeto). But, the young, forward-thinking brand isn't quite done with the keto crowd just yet.

They've also created a duo of products to help out the hard-training athletes that might be looking to maximize performance while still keeping the carbs next to zero. The first performance-boosting product we'll feature today is their intra workout -- Keto BCAA.

This is going to be an interesting one, and we'll have to see how it performs. Keto BCAA has BHB salts providing beta hydroxybutyrate, the primary energy source for keto dieters. But, it also has some glutamine and of course the BCAA valine, which may elevate blood sugar levels.

Normally, too much of those (especially glutamine) could be a risky thing if we were just sitting around. But when we're training, more ketones and a dash more glucose means two sources of energy to train on! So how will it perform? We'll have to find out.

After the blood tests, this is..... PricePlow Approved!

This one worked out quite well. So now you should check out the label:

Keto BCAA is the keto athlete's solution for better endurance, fat utilization, and recovery when foregoing carbs, the traditional fuel of slow-twitch and fast-twitch trainees.

BHB salts are a form of exogenous ketones that can be supplemented when shifting from carb to keto living, and help sustain performance during physical activity, which are usually fueled by carbs.[1,2] Studies show that BHB salts are beneficial for the endurance athlete, but may not necessarily be the best for the interval based training and other high-intensity activities.[3,4,5]

"Keto BCAA has two goals in mind: muscle recovery and endurance enhancement. Endurance enhancement was a big focus for us since exogenous ketones can help increase endurance by providing an efficient fuel source for the body. Coupling ketones with PeakO2 was a pretty unique 1-2 punch for this goal in our opinion and we're stoked to be the first to market with it."

Upon debut, KetoBCAA will come in one flavor -- Lemon Lime. Other BHB salt products we've tried have a distinctive salty flavor to them (due to the BHB salts), so it'll be interesting to see if Sparta can cover up that salty taste and deliver a tasty refreshing treat.

Keto BCAA is an intra workout option suited to consumers looking for something to drink that doesn't have too not many carbs, and is low on glucogenic aminos - although for hardcore dieting we'd still prefer they tossed the glutamine aside in favor of more leucine in future versions, but for endurance, you may actually perform better with it... and that's why it will probably stay. (Note that if you don't want glucogenic amino acids at all, then Keto Shred hits it on the head).

The addition of PeakO2 at a solid 2g dose makes it stand apart from the droves of other BHB only supplements on the market, as a supplement that not only powers performance, but can enhance it to.

Keto dieters are getting more supplement options, and Sparta Nutrition is definitely leading the way this year!