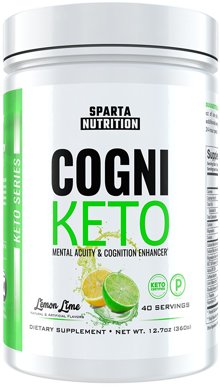 Sparta Nutrition is on a mission to be one of the dominant forces behind the rapidly expanding keto diet trend. So far, we've seen a Keto Coffee creamer and Keto Shred (diet aid drink).

A nootropic drink for low-carb dieters

But what about those times when you've got some brain fog while transitioning into ketosis, or just when you need to get focused without amino acids that may spike blood sugars? Sparta Nutrition has you covered there too, as the brand is aiming to take the cognitive-boosting effects of the keto diet one step further with CogniKeto.

Inside, you'll see some of the high-energy ingredients the brain and body loves to use, such as BHB and MCT, but it gets even better than that.

This stuff is the real deal!

CogniKeto hits so many notes that it's exactly what the market's been waiting for. Can't say enough good things about it. Watch the review above, or dig into the ingredients below:

Sparta Nutrition isn't pulling any punches with its keto nootropic here. At two scoops, you're going to get hit with some heavy doses of some of the most potent neurologically arousing compounds around.

Note: Doses listed below are based on one full serving (i.e. 2 scoops).

"We formulated CogniKeto for a few reasons. Of course, a well-dosed nootropic can provide the masses with a myriad of benefits including increased focus and energy, but, there was more to my thought process here.

There are quite a few studies that show how well the brain functions on ketones, as well as studies showing it can improve overall brain health. Some of which have become well-known studies on some serious brain diseases. I think brain health, since it's not mentioned very much in our space currently, is something that should be taken a bit more seriously and I thought offering a product with additional benefits for an improvement in cognitive health would be pretty novel and provide value to a consumer.

From Lion's Mane's studied ability to increase Nerve Growth Factor, to the literature for Ketone esters regarding brain health, or the attention increasing effects of Alpha GPC, etc, it was a no-brainer that this product could nail a few niches and we decided to proceed forward. We're very confident the public will see the value CogniKeto has to offer and it'll be a very popular product for Sparta." 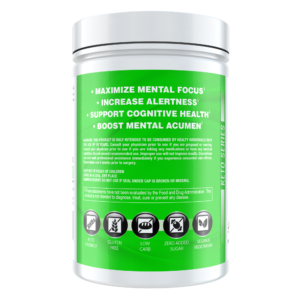 Increase focus and energy while obliterating mental fatigue and stress with CogniKeto.

As we've seen with the other members of Sparta Nutrition's keto series of products, each one is launched in only one flavor. The sole flavor that you can find CogniKeto in currently is Lemon Lime.

BHB salt-laden supplements are notoriously "salty" tasting, so it will be interesting to see how Sparta handles the flavoring challenges of this one, especially with the "earthy" Lion's Mane and Rhodiola ingredients inside as well.

This is a fantastic formula, especially for low-carb or keto dieters who are on an empty stomach. But even when on carbs, it should be "felt", we're just not sure how many benefits will be conferred compared to low-carbers.

CogniKeto is a worthy addition to any person looking to maximize brain function throughout the day, and not just for the ultra-low-carb keto crowd. At two scoops (one full serving), you'll realize what a real nootropic product can do and experience for yourself what it's like to be running on all cylinders when working.