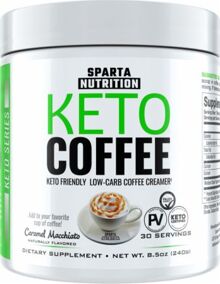 Go to Store
Quick Links to Deal PricesHow does this work and how do stores get listed? See our disclosure below to learn more.
Select Variation(s):
Size
Deal Price
30 Servings
Buy 1 Get 2 FREE
$11.99
B1G2
Go to Store
Go to Store
Compare store prices

One of the bigger trends seen during 2017 was the huge surge in popularity of the ketogenic diet. While the keto diet was initially used as a treatment for epilepsy a century ago, the keto diet stayed in the medical and bodybuilding communities the past few decades. However, keto has gone mainstream in more "regular" parts of the fitness community, all the way to regular dieters, appealing to everyone from hardcore biohackers to middle aged women.

Sparta Nutrition has seen the light, and is looking to assist this newfound demographic with the release of a full line of keto specific products intended to help users get the most from their new diet -- physically and mentally. The first up in this line of zero-carb products is Keto Coffee, a powder based coffee creamer replacement for enthusiasts of the popular Bulletproof Coffee.

Keto Coffee is mainly comprised of only MCT (medium-chain triglyceride) powder. There are no other ingredients listed on the Supplement Facts panel. It's only ingredient is a unique 4:2:1 MCT Blend, including: 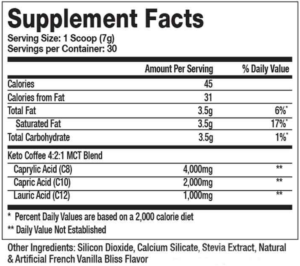 As stated above, MCT stands for medium chain triglyceride. MCTs are a special type of fat that bypass the liver and instead get immediately used for energy in the body. Numerous studies have been done on the MCTs and found that they provide all kinds of benefits[1,2,3], including:

These benefits are all in addition to MCTs ability to serve as a readily usable form of energy by the body, ideal for keto and non-keto dieters alike.

How MCT Oil Works -- and it does in a big way for keto dieters!

On our YouTube channel (where Sparta Nutrition is no stranger), PricePlow founder Mike has been running several keto experiments. One of the first ones he did was to investigate whether MCT oil really increased ketone levels, and when they did, he had to figure out why:

The answer is ketogenesis, and these saturated fatty acids are perfect for helping your body cleave off Acetyl-CoA molecules -- and you need three of them for every ketone produced. This is why saturated fats are so important for ketosis!

Regarding those experiments, he's sure to try out Sparta's Keto Coffee here, but given the ingredient profile of nearly all MCTs, we see no reason why things should go any differently than the video above!

The lauric acid debate: is it too long of a chain? (No!)

Some "hardcore" keto enthusiasts might question the inclusion of lauric acid as one of the MCTs used in Keto Coffee given its status as a true and blue MCT is somewhat debatable. 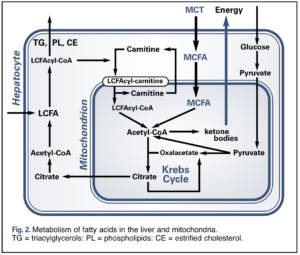 Does Lauric Acid really work as quickly as this image depicts of the metabolism of MCT suggests? Or does it need some enzymatic help first? Image Courtesy Nutrition Review

You see, lauric acid technically can be categorized as an MCT given it only contains 12 carbon atoms, but in truth it behaves more like a long-chain triglyceride in the body, meaning you theoretically won't get the "immediate" energy burst you do as you would from the other "true" medium-chain fats.[4] Lauric acid is processed by the liver, as opposed to the other MCTs (Caproic Acid and Capric Acid) which bypass the liver and are immediately used for energy by the brain and body.[5,6]

But does that matter? Not really at all. Coconut oil, which has plenty of lauric acid compared to MCT oil, still induces ketogenesis.

Anyone who challenges whether lauric acid would have a negative impact on your keto status doesn't understand the molecule nor ketogenesis itself. As your body cleaves those long saturated fatty acid chains, section by section, it provide tons of Acetyl-CoA molecules.

And this is why coconut oil, which is higher in lauric acid, worked just as well as MCT oil for Mike in his above experiments:

The point here is that lauric acid is just fine, and if anything, beneficial to have for the ride since it's only 1g, giving a good mix of short and longer-sustained energy (now if only we could get the coffee to last longer...)

So while we do like coconut oil in coffee, MCT is better used in products like Keto Coffee because it's easier to turn to powder -- coconut oil is a bit of a pain to use because it shifts from solid to liquid depending on the temperature in your home, while MCT is more consistent to deal with.

The bigger question: What is the MCT powder bound to?

Rather than concern ourselves with various fatty acid chains that all induce ketogenesis, we're more worried about something else - the medium used to make the product consistent!

In order to make MCT oil into a powder, it needs to be bound to something -- otherwise we'd have a tub of liquid here!

Unfortunately, some MCT powders use maltodextrin, which is a high-glycemic carb that may has well be a sugar, and that's not what keto dieters want.

So we asked Sparta Nutrition, and their response was quite good:

Negative on Maltodextrin. It's coconut and acacia gum fiber based.

PS: The manufacturer confirmed that _none_ of our Keto SKUs are using maltodextrin.

In our early-release label, Sparta lists "None" under the "Other Ingredients" portion, but for the production batches, there are actually a few others outside of the acacia gum fiber bound MCT:

One serving of Keto Coffee weighs 7g and contains the following nutritional information:

At launch, Keto Coffee will be available in only one flavor -- French Vanilla Bliss. Should the keto series of products do well for Sparta Nutrition, we fully expect them to release additional flavors in the future.

Expect to see more and more keto-specific products to hit the newswire in 2018, as the applications for the ketogenic diet have brought it beyond "fad" status (although its popularity will likely rise and fall back to homeostasis at some point.

Something magical starts to happen inside of your brain, metabolic system, and endocrine system once you truly become fat-adapted and enter ketosis. But that doesn't mean you want to live a life without your pleasures, such as really good coffee creamer.

So if you're ready to break your morning fast, then the MCTs in Sparta's Keto Coffee are a great way to kickstart your ketogenesis engine and keep the nasty carbs in those other "coffee creamers" out of the picture. No more corn syrup solids needed!