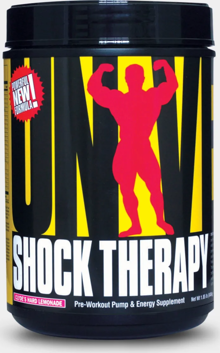 Go to Store
Quick Links to Deal PricesHow does this work and how do stores get listed? See our disclosure below to learn more.
Select Variation(s):
Size
Deal Price
42 Servings
$22.94
Go to Store
Go to Store
Compare store prices

Shock Therapy by Universal Nutrition is a complete, all-in-one pre-workout supplement that provides increased energy, muscle engorging pumps, and greater strength to power your way through any workout. This new formula, released in 2012, is available in four flavors.

Like the original formula, all your bases are covered with new Shock Therapy. Universal has added additional ingredients, such as branched-chain amino acids, beta alanine, and citrulline malate to the mix for one potent, pre-workout powerhouse.

One study found that citrullin malate may be useful for increasing high-intensity athletic performance with short rest times and for relieving muscle soreness after exercise.[1]

Universal has improved the flavors and has even added a few new ones to the mix, including Jersey Fresh Peach Tea and Hawaiian Pump.

While Shock Therapy lacks the hype that other pre-workouts have, feedback has been very positive. Shock Therapy is reasonably priced and is available in two sizes: a 40-serving and 10-serving container, which is useful for anyone who wants to try it out without committing to a large tub.

The NO complex contains citrulline malate, as well as a full serving of creatine, so there is no need to take your creatine separately during the day.

Another new ingredient is GlycoCarn (glycine propionyl-L-carnitine, or GPLC), a patented, biochemically-modified pharmaceutical compound. GlycoCarn has been extensively researched for performance-enhancing benefits and has been proven in scientific studies to promote improved muscle pumps and performance, enhance recovery, remove lactic acid, increase fat burning, and intensify energy for workouts.[1]

GlycoCarn also has strong antioxidant benefits and is active in the body for extended periods for improved athletic performance. Studies on GPLC have found that a 4.5g dose is appropriate for providing NO-boosting and multiple performance-enhancing benefits.

Branched-chain amino acids and beta-alanine are the cornerstone of the Muscle Strength Blend.

L-taurine is also part of the Muscle Strength Blend. Taurine is an amino acid — a required building block of protein.

Sustamine is an ingredient that works on multiple levels to help rehydrate the body and sustain energy levels during exertion.

If you're looking for a strong, stimulant-based pre-workout, Shock Therapy is not for you. But, if you want a clean, steady energy that kicks in just when you need it the most, this is the product.

Caffeine and L-tyrosine are the backbone of the Enertropic and Antioxidant Complex, as Universal calls it. Caffeine's benefits have been cited over and over, and include increased energy, alertness, and better mental focus. L-tyrosine is an amino acid that has a proven track record for supporting energy without any jittery side effects. The body uses L-tyrosine as a precursor to producing several important hormones and neurotransmitters, such as epinephrine (adrenaline) and dopamine. 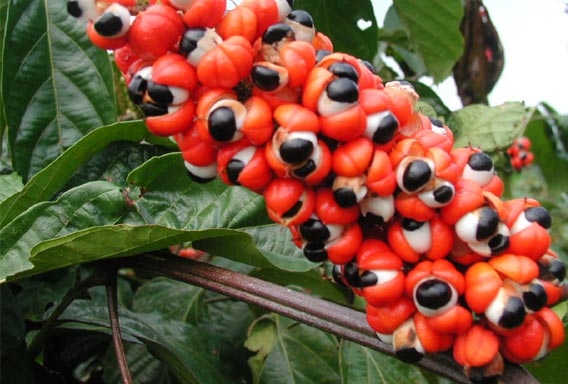 Guarana seed and green tea extract are also a part of the Enertropic and Antioxidant Complex. The active ingredient in green tea is a catechin called epigallocatechin gallate (EGCG), which increases fat burning by inhibiting an enzyme that normally breaks down norepinephrine. This results in higher epinephrine levels, which encourages greater fat burning and provides a mild stimulant effect. Green tea contains 2% to 4% caffeine, which increases alertness.

The leaves of this plant have a blend of xanthine alkaloids, such as theobromine, theophylline, and caffeine, which work together to get you revved up before workouts, boost strength, and endurance.

Alpha-lipoic acid is an antioxidant. Studies, such as the one done at St. Francis Xavier University, show that it enhances the uptake of creatine into muscle cells in animal models.[4]

Lastly, the Electrolyte & Delivery Complex consists of a carb-based blend of glucose polymers, D-glucose, and trehalose. This blend ensures rapid intake of the ingredients that can be felt within 30 minutes.

What shock therapy does not contain

There are no cheap fillers, such as maltodextrin. Nor does it contain banned substances.

The benefits of a pre-workout

Why take a pre-workout? It increases energy and delays fatigue. Additionally, you can work out harder for a longer period of time.

What does that mean for you? It means results. Research-proven ingredients, such as creatine, beta-alanine, and caffeine do all of the above.

Yes, you could piecemeal separate supplements together, but why go to all that trouble when they've been combined into one very effective product? Shock Therapy eliminates the pre-workout guesswork. 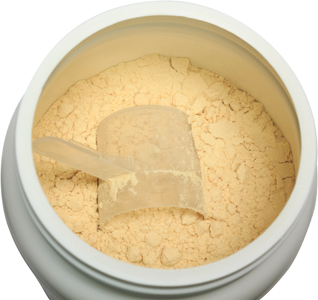 Be sure to read the label for directions on how to use Shock Therapy.

Consume 30 minutes prior to your workout. Use one to two scoops per training session, depending on factors like bodyweight, experience, and stimulant tolerance. If you weigh more than 200 pounds, you may require one-and-half to two scoops.

Always start with a single scoop serving (or less) to test your tolerance. It is recommended to not exceed two scoops in a single 24–hour period. Do not take within six to eight hours of bedtime.

This product is not recommended for anyone under the age of 18. Discuss with your doctor before using Shock Therapy, especially if you are taking any prescription drugs, over-the-counter medications, or supplements.

When doing your research, you will recognize that purchasing supplements online is the best strategy. Through the links on this page, you can save a significant amount of money on Universal Nutrition's Shock Therapy by purchasing online instead of going to a store. Make use of PricePlow's cost-comparison tool by clicking on "go to store," which will send you to the online store with the best deal.