Click the button above and PricePlow will email you with updates from Sparta Nutrition. 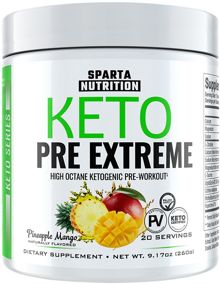 If you've been paying attention this opening month of 2018, you've noticed that Sparta Nutrition is launching an entire arsenal of ketogenic supplements. We've covered them all from the exciting Keto Coffee Creamer to their keto-friendly nootropic formula, CogniKeto.

Today we're bringing it all together with the fifth and final component of the Keto Series -- Sparta Nutrition's Keto Pre Extreme.

Led by BHB salts but also with a whole lot more, this keto-supporting pre workout supplement has everything a hard-training endurance athlete or keto dieter needs for those long training sessions.

It has fewer ingredients that will jeopardize your keto status, since too many pre workout ingredients (including nitric oxide boosters) are glucogenic amino acids (these are great for many, but sometimes counterproductive for keeping those blood sugar levels low as keto dieters must do). Keto Pre attacks that with extra ketones!

Now here's the trick. Once you've been keto dieting for at least a few months, you should be quite fat-adapted and well into ketosis. Workouts should have normalized, thanks in part to Sparta's Keto Series Supplements. 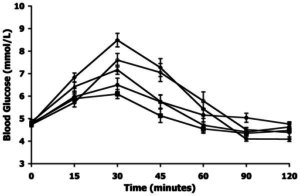 Don't be shy - SPIKE that blood sugar a bit. Just be sure to double it with ketones and get ready to TRAIN!

While your body is still familiar with glucose, consider adding a small amount of carbs (ie 15-25g) to your pre workout if you think you're going to have an insane workout. This will give you two sources of energy, and you will be able to accomplish crazy amounts of work! Yes, it may temporarily stop your own ketone production, but having BHB salts in here helps with that, and if you train hard enough, you'll burn that glucose and get back into ketosis soon enough. This is known as the CKD, or Cyclic Keto Diet, and it's for advanced users only who are no longer in a hurry to lose weight / burn fat. It's more for those trying to make or keep muscle and are willing to slow the fat burn for a while in exchange for additional performance. Remember, keto dieters have alternative fuel (ketones) - but that doesn't mean you have to completely ditch your original fuel once you've hit some goals! There's a trade-off, and it's worth taking, especially if you have BHB on hand to help amplify the situation.

Unfortunately, Mike just doesn't do well with L-Citrulline on the Keto Diet (full video here), so this one didn't pan out. Of all the Sparta Keto Supplements, this one gets last place. CogniKeto, on the other hand.... so good!

No longer do you have to worry about your mainstream pre workout messing with your keto status. Sparta Keto Pre Extreme is specifically formulated to improve your performance while supporting your dieting goals.

The caffeine might be a bit low for some, but for the endurance athletes, whom this is best suited for, the 200mg dose more is than enough to get them going and carry them through those long training sessions.

Click the button above and PricePlow will email you with updates from Sparta Nutrition.