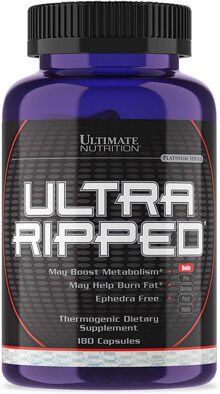 At the same time, garcinia extract, which includes (-) hydroxy citric acid (HCA), increases the production and storage of glycogen while reducing both appetite and weight gain. HCA also causes calories to be burned in an energy cycle similar to thermogenesis.*

Similar to green tea, Brazilian guarana, another source of natural caffeine, acts synergistically with other ingredients of Ultra Ripped to promote thermogenesis. Ultimate Nutrition‘s Ultra Ripped (ephedra free) capsules are manufactured under the strictest quality control to ensure your satisfaction. Ultra Ripped should be combined with physical activity, exercise and imrpoved diet.*