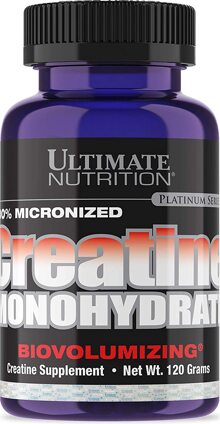 Go to Store
Quick Links to Deal PricesHow does this work and how do stores get listed? See our disclosure below to learn more.
Size
Deal Price
1000 Grams
$59.95
Go to Store
Go to Store
Compare store prices
See all Ultimate Nutrition Products on PricePlow
Ingredients

To perform optimally, muscles need energy. The body provides the energy needed in situations requiring immediate, high-intensity actions, as in exercise, in the form of ATP or adenosine triphosphate. Since the body has only a limited supply of ATP, usually lasting only a few seconds of intense exercise, ATP is continuously produced to supply energy in order for the muscles to function. The burst of energy is produced by the breakdown of ATP when one phosphate group is released and packs considerable metabolic energy. The body uses creatine phosphate to quickly replenish ATP.

The more energy the muscles store, the better they can perform in events, which require intense, immediate energy, such as weightlifting, sprinting, jumping, football, hockey and soccer. Since creatine is stored in the muscle as creatine phosphate, intake of supplemental creatine can increase the production of energy that enables muscles to perform at higher intensity. While the body produces its own supply of creatine, it is not sufficient to supply the muscle with the added energy necessary for intense performance.

The benefits of creatine supplementation for endurance athletes have been actively researched. This research has established that creatine can, in fact, extend endurance at a relatively high dose of 20 grams per day. Creatine increases the muscle mass and muscle girth if taken along with a sustained exercise regimen. Initially it may also increase weight due to gain in the muscle mass. This increase may slow down some people, especially swimmers. The "slowing down" may be due to the highly aerobic nature of this exercise and should be reversible after sustained exercise.

What is Creatine Monohydrate Dosage?

Creatine is taken in two phases. The first phase is the so-called "loading phase when creatine is used to load the body. Depending on the individual, it could vary between one and five days with approximately five grams of creatine is taken three to four times a day. In the "maintenance" phase following the "loading" phase, creatine levels are maintained by a dose of five to 15 grams per day in divided dosages of five gram at one sitting for up to three months.

According to reports professional athletes and Olympians use creatine monhydrate to enhance their performance. Creatine is taken most commonly ingested by weightlifters and bodybuilders. Since muscle strength and endurance increases all athletic performance, athletes of all stripes benefit from creatine supplementation, including runners, swimmers, cyclists, skiers, martial artists, wrestlers, football and rugby players and tennis and basketball players.

Is Creatine Found in Foods?

To varying degrees creatine is found in many foods. The richest source of creatine is lean red meat and fish. A 2.2-pound steak contains roughly six grams of creatine. It should be pointed out that eating large amounts of red meat might be unhealthy.

Is There Creatine Deficiency?

Since creatine breaks down rapidly during the first few minutes of intense exercise, creatine deficiency may ensue. That may result in decline in muscle power and onset of fatigue during intense muscle contractions.

Is There Creatine Balance in the Muscle?

Yes, the muscle has creatine equilibrium. Creatine has a normal turnover rate of 2 grams per day. That is, two grams of creatine are irreversibly degraded and, in its place, equivalent amount is synthesized to replace it. There is a balance between creatine pool inside the muscle cells and creatine circulating in the blood. After the start of creatine supplementation, this balance may be slightly perturbed, but the body quickly adjusts to the new equilibrium within a few days.