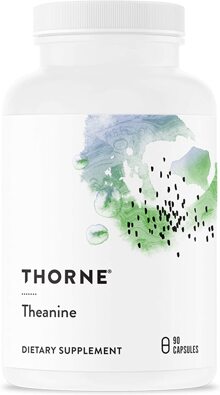 Go to Store
Quick Links to Deal PricesHow does this work and how do stores get listed? See our disclosure below to learn more.
Size
Deal Price
90 Capsules
$55.10
Go to Store
Go to Store
Compare store prices
See all Thorne Research Products on PricePlow

Go to Store
Thorne Research, Theanine, 90 Veggie CapsL-theanine is a unique amino acid present almost exclusively in the tea plant (Camellia sinensis) and used safely in Japan for decades. L-theanine has demonstrated the potential to positively modify brain waves and key neurotransmitters involved in mood, focus, and memory. Consumption of L-theanine enhances brain alpha-wave activity, a sign of relaxation. The intensity of brain alpha-wave activity increases within 30-45 minutes of L-theanine supplementation, promoting relaxation, mental focus, and acuity.This effect is most pronounced in persons subjectively feeling the highest levels of distress. A small Japanese study of university students showed 200 mg oral L-theanine led to increased brain alpha-waves and a subjective sense of relaxation. Theanine administration caused a dose-dependent relaxed, yet alert, state of mind without sedation, beginning approximately 40 minutes after oral dosing. L-theanine can enhance the production of the neurotransmitters dopamine and serotonin and appears to play a role in the formation of GABA – a neurotransmitter that acts like a "brake" during times of runaway stress. Theanine helps establish balance in the neurotransmitter system, resulting in improvements in the mental/emotional and physical disturbances resulting from being overly stressed.Thorne Research, Theanine, 90 Veggie Caps