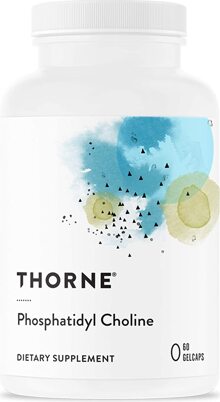 Go to Store
Quick Links to Deal PricesHow does this work and how do stores get listed? See our disclosure below to learn more.
Size
Deal Price
60 Softgels
$26.60
Go to Store
Go to Store
Compare store prices
See all Thorne Research Products on PricePlow

Phosphatidylcholine is a major component of the membranes of the liver cells (hepatocytes). As such, it provides significant protection for the liver, probably because good liver health requires the ongoing replacement of old cell membranes with healthy new ones. Phosphatidylcholine has been shown in numerous studies to protect liver cells from damage from a variety of toxins, including ethanol, carbon tetrachloride, trichloroethylene (used in dry cleaning and as a degreasing solvent), and mushroom toxins. Phosphatidylcholine is an important component of the lipids that circulate in the bloodstream, and is a major constituent of bile, which is necessary to metabolize fats. Phosphatidylcholine also has the potential to decrease the absorption of dietary cholesterol, which helps maintain a normal cholesterol level.

The findings from eight double-blind clinical trials and numerous other reports that have studied phosphatidylcholine indicate that it supports faster rebuilding of liver tissue and accelerated restoration of overall wellbeing.