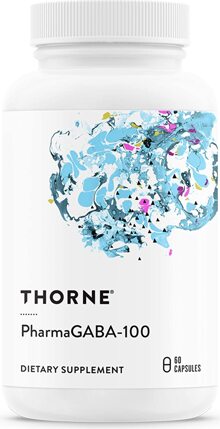 Go to Store
Quick Links to Deal PricesHow does this work and how do stores get listed? See our disclosure below to learn more.
Select Variation(s):
Size
Deal Price
60 Capsules
$26.60
Go to Store
Go to Store
Compare store prices
See all Thorne Research Products on PricePlow

Go to Store
Thorne Research, PharmaGABA-100, 60 Veggie CapsGamma-aminobutyric acid (GABA) is a major neurotransmitter widely distributed throughout the central nervous system. Because too much excitation can lead to irritability, restlessness, sleeplessness, and spasmodic movements, this excitation needs to be balanced with inhibition. GABA – the most important inhibitory neurotransmitter in the brain – can provide this inhibition, acting like a "brake" during times of runaway stress. In addition, studies also indicate GABA can promote relaxation and enhance sleep. It is thought that either low GABA levels or decreased GABA function in the brain may have an adverse impact on neurological health. Thorne Research, PharmaGABA-100, 60 Veggie Caps

Stress is a normal part of life. Job pressures, family contention, financial insecurity, traffic, and time management are just a few of the stressors we are faced with on a daily basis. For some people, the effects can be overwhelming, leading to feelings of nervousness. Managing stress can exert beneficial effects on the cardiovascular, immune, and neuroendocrine systems. Thorne Research, PharmaGABA-100, 60 Veggie Caps

GABA regulates nervousness by calming excitatory neurotransmitter activity Thorne Research, PharmaGABA-100, 60 Veggie CapsIncreased GABA levels improve mental focus and relaxation, without drowsinessThorne Research, PharmaGABA-100, 60 Veggie CapsIn at least one study, natural PharmaGABA decreased signs of stress; synthetic GABA did notThorne Research, PharmaGABA-100, 60 Veggie CapsThe natural GABA in Thorne's PharmaGABA-100 is produced via a fermentation process that utilizes Lactobacillus hilgardii, the bacteria used to ferment vegetables in the preparation of the traditional Korean cabbage dish known as kimchi. Clinical studies show this natural form of GABA can increase the production of alpha-waves in the brain, creating a profound sense of physical relaxation while maintaining mental focus. In contrast, the stress-related beta-waves in the brain are decreased. In addition to changes in brain waves, natural PharmaGABA has been shown to produce relaxation, as evidenced by reduced pupil diameter, heart rate, and two natural markers of stress – salivary cortisol and chromogranin A. In a head-to-head, double-blind trial of natural PharmaGABA versus synthetic GABA, synthetic GABA did not demonstrate these positive effects.

Who Should Use PharmaGaba?

Anyone feeling overwhelmed or over-committedAnyone coping with mental, emotional, or physical stressPeople suffering from poor sleep qualityAthletes engaging in strenuous workouts (that tend to elevate cortisol levels and depress immunity)The Science Behind PharmaGABAClinical studies have shown that natural PharmaGABA increases the production of alpha-brain waves, creating a profound sense of physical relaxation while maintaining mental focus. In contrast, stress-related beta-waves are decreased.

A small pilot study conducted at the University of Shizuoka in Japan enrolled 13 healthy volunteers, seven maled and six females, ages 21-35. EEG tracings were recorded before and after each of three administrations of 200 ml distilled water:

only distilled waterdistilled water containing 100 mg PharmaGABAdistilled water containing 200 mg L-theanine (an amino acid from green tea known to increase alpha-beta brain waves)Tests of the three administrations were separated by seven-day intervals. EEG recordings were made before administration, then at 0, 30, and 60 minutes after each administration for five-minute recording sessions. Alpha and beta waves were calculated as a percentage, and pre-and post-administration values were compared. Alpha-to-beta ratios were calculated as a ratio between alpha and beta percentage values. GABA produced significant effects on both increasing alpha waves and decreasing beta waves, resulting in a highly significant increase in the alpha-to-beta wave ratio.

In addition to changes in brain waves, PharmaGABA has been shown to produce relaxation as evidenced by reduced pupil diameter, heart rate, and markers of stress - salivary cortisol and chromagranin A. In a head-to-head, double-blind trial of natural PharmaGABA versus synthetic GABA, the synthetic GABA did not demonstrate these effects.

A study on healthy male athletes using PharmaGABA added to a beverage showed a reduction in stress markers during and after exercise. Additional clinical studies with PharmaGABA yield further evidence of its anti-stress activity. Secretory IgA (sIgA) is am important antibody in saliva that helps support immune function. Typically, during times of stress salivary sIgA levels drop. In one study, subjects with acrophobia (fear of heights) traversed a long walk suspension bridge that spanned a 150-foot high canyon. Salivary sIgA levels decreased when subjects were given a placebo; however, when they were given PharmaGABA, salivary sIgA levels were maintained half-way across the bridge and actually increased upon completion of the crossing.

The Thorne Difference. For more than 25 years, Thorne has relentlessly pursued the highest possible quality and bioavailability in dietary supplements. At Thorne, they actually manufacture products that they sell – a key difference that allows Thorne to control every aspect of the manufacturing process and ensure that every Thorne product is in pure, completely hypoallergenic form, and without the common additives, flowing agents, and binders used throughout the industry.

A few other companies have tried to do what Thorne does, and many others claim to have the same philosophy and quality, but nobody has been able to duplicate what Thorne's clients call "Thorne Quality." Thorne has changed the industry in many ways over the past two decades, and they continue to raise the bar and set new standards in product formulation, raw material purity, manufacturing, and quality control.

Thorne's Commitment to PurityPractitioners have become accustomed to seeing the vague "We use only the purest ingredients" in the promotional materials of almost every dietary supplement company. Perhaps these companies truly believe that. Perhaps they don't know any better. Nevertheless, Thorne Research, for more than 25 years, has been the standard by which companies in the industry are judged for product purity. Practitioners rely on Thorne as the company they trust for their extremely allergic, chemically sensitive, and immune-compromised patients.

Purity Takes Extra EffortFor example, instead of purchasing prediluted vitamin D, as other companies do, Thorne performs its own dilution to avoid detrimental ingredients, such as the preservatives or lactose that are found in many commercially available dilutions. Why must vitamin D be diluted? Because in its pure form, it is too concentrated to safely blend into a vitamin product. Pure vitamin D is 40 MILLION International Units (IU) per gram. The RDA for adults is 600-800 IU per day. To ensure proper mixing, it must be made into a dilute powder that flows and does not lose potency. So, unlike companies that use prediluted vitamin D that contains unacceptable excipients and preservatives, at Thorne, pure pharmaceutical vitamin D is first blended with pure mixed tocopherol vitamin E, and the resultant stable vitamin D is then blended with hypoallergenic cellulose powder. The final powder is blended in a large tumble blender and subsequently analyzed. Not only is the final product stable; it is also hypoallergenic and can be mixed homogeneously and at a safe level with other powders. Just as with vitamin D, Thorne utilizes similar processes for other raw materials, such as vitamin K, leaving it to other companies to purchase commercially available raw materials filled with unacceptable ingredients and preservatives.