Click the button above and PricePlow will email you with updates from Thorne Research. 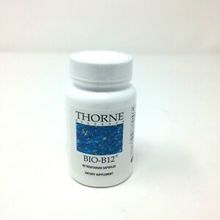 In order for vitamin B12 to be absorbed in the gastrointestinal tract, it first needs to be bound in the stomach to a protein called R-protein. In the intestines pancreatic proteases cause the R-protein to release vitamin B12 to bind with intrinsic factor, making it absorbable. Thorne Research's Bio-B12 contains methylcobalamin (an active form of vitamin B12) and 5-MTHF (an active form of folate) in a base of papain. Papain is a potent protein-digesting enzyme from papaya that also results in the release of vitamin B12 from the R-protein, thus facilitating the absorption process. Zinc picolinate is included for support of the pancreas, which produces other digestive enzymes that facilitate the absorption process.

Click the button above and PricePlow will email you with updates from Thorne Research.