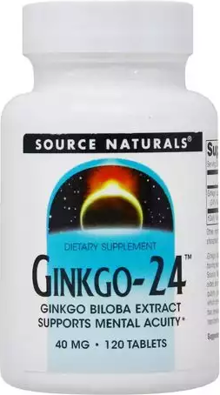 Go to Store
Quick Links to Deal PricesHow does this work and how do stores get listed? See our disclosure below to learn more.
Select Variation(s):
Size
Deal Price
120 Tablets
$12.29
Go to Store
60 Tablets
$14.30
Go to Store
Go to Store
Compare store prices
See all Source Naturals Products on PricePlow
Ingredients

Ginkgo biloba is the oldest living species of tree on Earth, having existed virtually unchanged for over 200,000,00 years. The ginkgo leaf is a rich source of flavone glycosides, bioflavonoids which deliver potent antioxidant protection. The nutrients in ginkgo extract have also been shown through extensive research to support blood vessel integrity, which is particularly important for the fine capillaries in the brain. Source Naturals Ginkgo-24 provides a purified 24% extract of ginkgo flavone glycosides from concentrated premium quality ginkgo leaves.