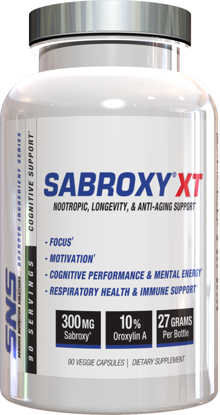 Go to Store
Quick Links to Deal PricesHow does this work and how do stores get listed? See our disclosure below to learn more.
Size
Deal Price
90 Vcaps
Buy 1 Get 1 FREE
$56.99
BOGO
Go to Store
Go to Store
Compare store prices

Sabroxy is a standardized extract from the bark of the Oroxylum Indicum tree that contains a minimum of 10% Oroxylin A. It is commonly used to support improved focus, motivation, and mental energy as well as skin, respiratory, and immune system health.

Ask Yourself a few questions:

If you answered yes to any of the above questions, Sabroxy may of interest to you.

Sabroxy is a fascinating ingredient that is a standardized extract from the bark of the Oroxylum Indicum tree and is standardized to a minimum of 10% Oroxylin A. In addition to its Oroxylin A content, Sabroxy also possesses a variety of other pharmacologically active phytoconstituents including flavones and their glycosides, triterpenoids, stilbenoids, anthraquinones, phenolic acids, fatty acids, and alkaloids. Out of the many phytoconstituents found in Sabroxy, some of the most significant ones are Baicalein, Oroxylin A, Chrysin, and their derivatives.

The Oroxylum Indicum tree that Sabroxy is derived from has a history of use in Ayurvedic medicine for its cognitive health benefits including mental alertness, memory, & motivation as well as to support respiratory health, libido, healthy immune support, and for its anti-inflammatory properties.

Sabroxy was found to substantially promote focus and motivation during trials. When compared to other extracts with similar mechanisms, Sabroxy was deemed the most effective for promoting focus and supporting motivation and outperformed various other compounds by a wide margin!

Oroxylin A is a flavone that comes from the Oroxylum Indicum tree, which exists widely in India and Southeast Asia and has an extensive history of use in Ayurvedic medicine.

Oroxylin A has been widely researched around the world and has been shown in studies to possess a broad spectrum of potential cognitive benefits including improved focus, motivation, & mental energy as well as improved skin health, respiratory health, and immune support.

Oroxylin A has also been shown to help support neurogenesis (neuron formation) and cognitive function through its promotion of CREB (cAMP response element binding protein) and BDNF (brain derived neurotrophic factor). Neurogenesis is the process by which new neurons are formed in the brain.

Interestingly, even though many people don’t associate balanced inflammation levels with cognitive function, research has shown that Oroxylin A’s interactions with the above pathways can indirectly support the foundation of cognitive faculties. Combined with Oroxylin A’s interactions with CREB and BDNF, this shows great potential to help promote cognition from the ground up!

SNS Sabroxy XT can be stacked with Focus XT, Stress & Anxiety Support, KannaEase, and/or a wide variety of other SNS products for improved synergistic results.

* These statements have not been evaluated by the Food and Drug Administration. This product is not intended to diagnose, treat, cure, or prevent any disease.