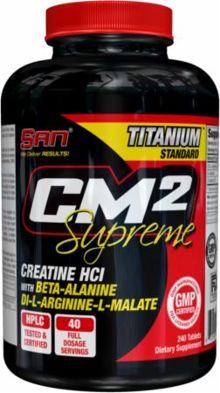 Go to Store
Quick Links to Deal PricesHow does this work and how do stores get listed? See our disclosure below to learn more.
Size
Deal Price
240 Tablets
$29.22
Go to Store
Go to Store
Compare store prices
See all SAN Products on PricePlow
Ingredients

CM2 Supreme is the world’s first molecularly modified creatine. When absorbed and utilized in the body, creatine is a powerful anabolic compound that can increase muscle mass, strength and endurance.* Creatine however, is very unstable, and because of this, maximal absorption and assimilation is not easy to achieve. In fact, with regular creatine products, so much of its active ingredient is destroyed, that little, if any, is available to be utilized in the body.*

Several futile attempts have been made to solve the problem, but until CM2 Supreme came along, none had hit a “pay day.” Once in the body, ordinary creatine easily degrades into a by-product called Creatinine, which is not only useless, but potentially detrimental to physical enhancement. Our new and unprecedented technology has molecularly altered the creatine molecule to withstand the degradation process in the stomach. By fusing hydrochloric acid and base creatine, we were able to create CM2 Supreme, making the creatine molecule more robust and perfectly assimilated in the body.*

Each serving of CM2 Supreme also produces b-Alanine, a precursor to carnosine. Increased levels of carnosine are known to buffer lactic acid in skeletal muscle by adapting to negative hydrogen ions. To translate: you’ll be able to train harder and do more reps with heavier weight because high levels of carnosine in your muscle will delay the onset of fatigue, even during the most intense and stressful workouts.* As a result, users will boost muscular strength, endurance and increase explosive power and speed for sprinting.*

The addition of b-Alanine provides the body with what it needs to produce maximal levels of carnosine stores. But beyond that, b-Alanine works synergistically with the entire CM2 Supreme formula to actually make creatine work better.*

CM2 Supreme also showcases Di-L-Arginine-L-Malate. This cutting edge new compound is known as a cell-signaling agent and therefore involved in many very beneficial biological activities in the body including nutrient delivery, oxygen uptake and glycogen storage.*

Now that you’ve got all the facts, it’s obvious that CM2 Supreme represents the latest scientific breakthroughs in creatine, arginine and muscle carnosine delivery technologies. SAN has once again pushed the envelope by creating the world’s first Super Muscle Volumizer. Leaving no stone unturned in the continuing quest to design the most technologically advanced, safe and effective supplements, SAN has raised the bar even higher and set the new standard. Unleash your genetic potential today by letting CM2 Supreme work its magic on you.*