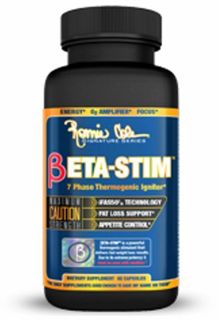 Go to Store
Quick Links to Deal PricesHow does this work and how do stores get listed? See our disclosure below to learn more.
Select Variation(s):
Size
Deal Price
45 Servings
$24.95
Go to Store
Go to Store
Compare store prices
See all Ronnie Coleman Products on PricePlow
Ingredients

Look, there are a lot of Thermogenic products out there and a lot of good ones to be honest. However, they only target fat burning from a few angles. Beta-Stim targets fat through 7 diferent phases to get you ripped fast! *

Extended Release Caffeine (Caffeine Anhydrous & PharmaShure XR Caffeine) , Synephrine HCL… This combination of ingredients is guaranteed to light you up fast with a massive blast of instant energy that will wake you up! However, you want this feeling to last all day right? The PharmaShure extended release caffeine picks you up right when you normally would experience a "crash" and continually releases over 6 hours giving a constant shot of energy all day.*

When you are dieting it is important to have clear mental focus all day as well as keeping your mood in check. Schizandra Extract is a natural plant extract used in traditional Chinese medicine to support concentration, memory and alertness as well as a "stabilizing" effect. Huperzine A is an acetylcholinesterase inhibitor and NMDA receptor antagonist shown to be effective in improving cognitive performance.*

One thing that may be holding you back from looking your best is extra water between your skin making you appear puffy and not a defined as you really are underneath. The thermogenic activators on their own will help with excess water removal but the Dandelion Root in βeta-Stim rounds everything out. This ingredient has been used for years for its diuretic effects helping to flush out the excess water holding you back from your best look.

Keeping your appetite in check is key during the road to weight loss. iFAS503 (Green Tea, Tuber Fleeceflower & Parasitic Laranthus), also in the thermogenic activators, has appetite control properties as well. This ingredient's ability to inhibit fatty acid production in the body causes a reduction in appetite. Another item from the thermogenic activators, Acacia Rigidula, doubles as an appetite suppressant as well.*

Increasing your body's resting metabolic rate (RMR) can help to accelerate weight loss by amplifying the amount of energy your body uses while at rest. In short, Diiodotyrosine, or DIT and Green Coffee Extract can affect the rate at which your body burns calories while you are inactive.*

Fat burning is a process that requires oxygen to be executed. Adhatoda Vasica is an ingredient which has been used as a bronchodilator to open up breathing pathways leading to more efficient breathing and more oxygen. When it comes to burning fat the more oxygen the better.*

Acacia rigidula - "blackbrush" is a perennial shrub and member of the legume family. Native to southern Texas and central Mexico, it has been used by Native Americans for decades. Acacia is used in weight loss supplements because of its adrenergic amine content. These compounds stimulate beta-receptors to increase lipolysis and metabolic rate and decrease appetite. Phenylethylamine hydrochlor- ide in Acacia Rigidula stimulates the Central Nervous System (CNS) to enhance mood and promote a sense of well being and satiety. The herb is believed to trigger the release of dopamine in the pleasure-sensing area of the brain as well. *

A novel proprietary patented ingredient comprised of three potent Fatty Acid Synthase (FAS) inhibitors: Green Tea, Tuber Fleece flower and Parasitic Loranthus. FAS is an enzyme that produces fatty acids which can be used as high energy fuel for tissue during intense exercise or more commonly stored in fat cells as triacylglycerol. When FAS is inhibited, the body's ability to form fatty acids for storage is limited which may lead to appetite and weight reduction. iFAS503 may also have a thermogenic enhancing effect which could cause an increase in energy expenditure and eventually weight loss.*

This plant grows wild in abundance all over Sri Lanka, Nepal & India. Adhatoda Vasica has bronchodilator like effects which means it opens up the breathing pathways to encourage more oxygen intake. Vasicine, the active alkaloid compound, has been compared to theophylline, used in therapy for respiratory diseases, both in vitro and in vivo. *

Historically, dandelion was prized for a variety of medicinal properties and it contains a wide number of pharmacologically active compounds. Dandelion is used as a herbal remedy in Europe, North America and China. It has been used in herbal medicine to treat many issues but more importantly has been used as a diuretic to excrete excess water from the body. *

Derived from "green coffee beans," the raw, unroasted seeds of Coffea fruits which contain chlorogenic acid (CGA). CGA has been shown to slow the absorption of dietary fat and increase metabolism of extra body fat while curbing appetite. CGA may also inhibit the release of glucose in the body while increasing metabolism or fat usage in the liver. Simply put, it may increase your body's ability to metabolize stubborn fat. *

The use of willow bark dates back thousands of years for the treatment of pain, headache and inflammatory conditions. The bark of white willow contains salicin, which is a chemical similar to aspirin (acetylsalicylic acid). In combination with the herb's powerful anti-inflammatory plant compounds (called flavonoids), salicin is thought to be responsible for the pain-releiving and anti-inflammatory effect of the herb. In fact, in the 1800's salicin was used to develop asparin. *

Commonly known as demethyl coclaurine and norcoclaurine and found in a variety of plants. This compound has been demonstrated to be an effective beta-1 and beta-2 adrenergic agonist. Which basically means that it can increase your heart rate (Beta-1) and then metabolize fat by prompting lipolysis (Beta-2). During all of this triglycerides will be released from fatty cells to be made available for energy. Higenamine has also shown secondary bronchodilator effects. *

An extract of the Nelumbo Nudifera plant, commonly called Lotus. Nelumbo, native to southern Asia and Australia, has been cultivated in China since the 12th century BC. Nelumbo affects beta-adrenergic receptor pathways, increasing lipolysis which can reduce postprandial plasma triacylglycerol levels. It may also decrease the over-production of apolipoprotein. Apolipoprotein can increase lipid concentrations in the blood leading to an increase in fat storage. Lastly, Nelumbo can help increase thermogenesis by affecting the uncoupling protein 3 (USP3) in muscle and adipose tissue, in doing so it helps decrease fat mass and metabolizes lipids and fatty acids for energy production. *

Caffeine Anhydrous is the dry powder form of caffeine. The word anhydrous indicates it does not contain water. It is a Central Nervous System (CNS) stimulant and the most widely consumed energy ingredient on the planet. PharmaShure XR Caffeine is a micro-encapsulated form of caffeine designed to release slowly over an extended period of time prolonging the effects of the caffeine. *

AKA the "Ultimate Superberry" is an extract from the Schizandra Berry that has been used in traditional Chinese medicine for centuries to promote concentration, memory and alertness without any side effects such as nervousness. It is also reported to produce a "calming" effect and general feeling of "well-being". It is also a powerful anti-oxidant and anti-inflammatory. *

A naturally occurring plant alkaloid extract of bitter orange peels that acts as an adrenergic (adrenaline-like) stimulant on the Central Nervous System (CNS). Another action is through activation of the beta-3 adrenergic receptors that are found on fat cells, which promote the breakdown of fat. *

A naturally occurring alkaloid compound found in the firmoss Huperzia serrata plant that may improve cognitive function and mental abilities by causing an increase in the levels of acetylcholine by inhibiting their breakdown. Acetylcholine is one of the chemicals that our nerves use to communicate in the brain, muscles and other areas. *