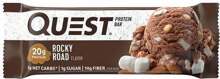 Go to Store
Quick Links to Deal PricesHow does this work and how do stores get listed? See our disclosure below to learn more.
Select Variation(s):
Size
Deal Price
12 Bars
$19.99
Go to Store
1 Bar
$2.38
Go to Store
Go to Store
Compare store prices

Quest Nutrition's product line attempts to solve the age-old problem of protein bars: How do you make a protein bar that tastes good, is sugar-free, low-carb, and has an acceptable shelf life?

The answer is a protein blend consisting only of whey and milk protein isolate (refined to have no fat and nearly no carbs) combined with a prebiotic fiber blend, 100% natural flavors, and sweetened with a combination of either lo han guo and sucralose, or stevia and erythritol.

Quest's open label policy, and commitment to natural ingredients, is what initially caught our eye. Unlike many other protein bars on the market, it's easy to identify exactly what you're putting into your body. Each bar contains 20g of protein and the bulk of your necessary dietary fiber. Depending on flavor, Quest Nutrition protein bars run from about 160 to 210 calories.

Mainly, we're interested in the sweeteners used to make Quest protein bars, as well as a particularly difficult-to-pronounce fiber additive.

The sweeteners used in Quest bars may be unfamiliar, but at this point, most people are least passingly familiar with stevia — the sweet leaf extract that barely has an effect on blood glucose levels. But what are lo han guo, sucralose, and erythritol? Let's take a closer look.

Much as the stevia plant was used as a sweetener indigenously in South American countries for many years before it was popularized as an additive, lo han guo is a fruit native to China that has been used there as a natural sweetener (as well as a traditional treatment for diabetes and obesity) for thousands of years.[1] It's also sometimes called the "monk fruit" or "Buddha fruit".

Sucralose is table sugar that has been modified to remove calories and sugar's damaging effects on tooth enamel. It also does not affect insulin levels. Though you may not be familiar with the name, it's the ingredient used to sweeten Splenda.

Erythritol is a sugar alcohol that's unique in that it doesn't cause the gastrointestinal distress that other sugar alcohols are known for.[2] It has a minute number of calories (it's legally labeled as zero calories in the U.S., but actually has a fraction of a calorie per gram), does not spike blood sugar, and does not promote tooth decay.

There's one other ingredient that's an unfamiliar mouthful of a name, but it's simply a manufactured fiber additive that's also a prebiotic (good for the digestive system). It's been shown in several studies to improve colon function when added to the low-fiber diets of elderly patients.[3,4] 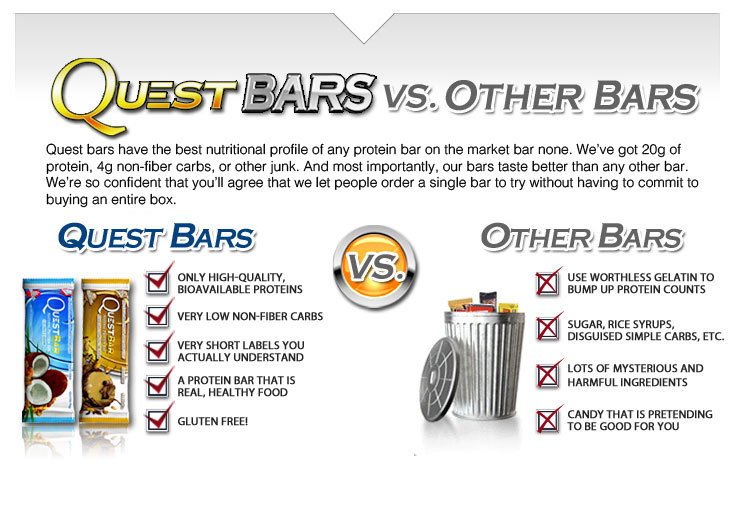 What makes Quest bars different than the competition's protein bars?

Each of Quest Nutrition's protein bar flavors come from natural sources. For example, their chocolate bars use actual cocoa, and the berry bars use a combination of freeze-dried berries.

The only major nutritional difference between the flavors is that some are much higher in saturated fat than others. The flavors with chocolate and cookies and cream are the heaviest, at about 3g of saturated fat per bar. Overall, most of the bars have very saturated fat, and several have none at all. Banana nut muffin, lemon cream pie, cinnamon roll, and, surprisingly, strawberry cheesecake are all completely free of saturated fat.