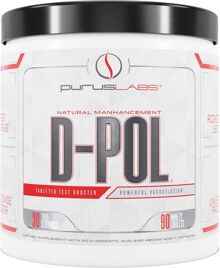 Go to Store
Quick Links to Deal PricesHow does this work and how do stores get listed? See our disclosure below to learn more.
Select Variation(s):
Size
Deal Price
90 Tablets
$23.99
Go to Store
30 Servings
$24.89
Go to Store
Go to Store
Compare store prices
See all Purus Labs Products on PricePlow
Ingredients

Superior nutrient delivery due to heightened and sustained vasodilation!

Considering the sound evidence for a role of DAA in testosterone synthesis, a human study was recently performed to assess the effectiveness of oral DAA supplementation with regards to testosterone elevation (Topo et al., 2009). Subjects included 43 men (27-37 yrs), 20 who received a placebo and 23 who received a DAA supplement (3.12 grams of DAA combined with B-vitamins—the same dosage of DAA provided within d-pol). The supplement was delivered orally for 12 days. Following the 12 days of treatment with the supplement, 20 of the 23 subjects (87%) had significantly higher circulating LH levels, with an average increase of 33%. With regards to circulating testosterone, 20 of the 23 subjects (87%) had significantly higher values at day 12 compared to pretreatment, with an average increase of 42%. For both LH and testosterone, the changes were time dependent—a greater increase was observed on day 12 compared to day 6 of treatment. Therefore, it is hypothesized that continued treatment would have resulted in a further increase in these variables.

At the present time, it is unknown what amount of DAA would need to be orally ingested by humans in order to increase aromatase activity. No adverse outcomes were noted in the Topo et al. (2009) investigation, however, as with other testosterone stimulating agents, a cyclic schedule of supplementation is recommended unless personal assessment deems otherwise. If adhering to this recommendation, and considering the inclusion of vitamin D within D-Pol, it may be most logical to cycle “off” during periods of optimal sunlight exposure (i.e. summer, when natural vitamin D synthesis would be highest—see text below for additional information pertaining to this).

Aside from the myriad of positive metabolic effects B vitamins have, of greatest importance in relation to the use of these vitamins within D-Pol, these B-vitamins have been used in combination with DAA for purposes of elevating circulating testosterone: B9 (folic acid), B6 (pyridoxine), and B12 (cyanocobalamin). Because dietary folic acid is not well metabolized to the active form by some individuals due to a genetic defect within the folate pathway, the naturally occurring form of this vitamin (folate) is included within D-Pol.

Nitrate is an inorganic anion abundant in vegetables (e.g., beets, spinach) and converted within the body to nitrite in the entero-salivary circulation (Duncan et al., 1995). The study of nitrate, nitrite, and bioactive nitrogen oxides including nitric oxide, is of great interest to investigators, due to the multiple biological roles of the nitrate-nitrite-nitric oxide pathway (Lundberg et al., 2009).

While most exercise studies have involved aerobic work, one recent investigation has focused on resistance exercise (Bailey et al., 2010). In this study, nitrate supplementation attenuated the reduction in muscle phosphocreatine concentration and the increase in VO2 during low intensity exercise; during high-intensity exercise, nitrate supplementation reduced VO2 slow components and significantly improved exercise time to exhaustion. Moreover, the total rate of ATP turnover was estimated to be less for both low-intensity and high-intensity exercise. The authors concluded that the reduced oxygen cost of exercise following nitrate supplementation appears to be due to a reduction in the ATP cost of muscle force production. These findings are further supported by a recent investigation noting an improvement in mitochondrial efficiency with nitrate supplementation (Larsen et al., 2011), a finding that is also correlated to the reduction in oxygen cost during exercise. Collectively, these changes appear to allow exercise to be tolerated for a greater period of time—which may translate into more repetitions being performed during a given set of exercise and/or a greater load to be used during each set of exercise. For aerobic exercise bouts, the duration of exercise may be increased following supplementation. All welcomed attributes to ANY athlete!

In addition to the above benefits of nitrate supplementation, it has been noted that nitrate may also improve the absorption of certain nutrients.

Finally, it is important to address the potential safety concern over ingestion of dietary nitrate, which has been raised (Derave & Taes, 2009; Petróczi & Naughton, 2010), with more specific concern over ingestion of high amounts of dietary nitrite (Lundberg et al., 2011). This has been appeased in recent years by experts working specifically in this area of research (Benjamin et al., 2009; Gilchrist et al., 2010). The general consensus is that ingestion of low amounts of dietary nitrate appears safe and may be associated with improvements in parameters of health (e.g., vascular function) and physical performance.

Activated vitamin D (calcitriol) has been referred to as a pluripotent pleiotropic hormone (Cannell et al., 2009). As a hormone regulating more than 1000 vitamin D-responsive human genes, vitamin D may influence athletic performance. As noted by Cannell and colleagues (2009) in a recent review article on the topic "physical and athletic performance is seasonal; it peaks when 25-hydroxy-vitamin D levels peak, declines as they decline, and reaches its nadir when 25-hydroxy-vitamin D levels are at their lowest." These findings are underscored by the potential impact that vitamin D has on skeletal muscle, as described recently (Bartoszewska et al., 2010; Ceglia, 2009; Hamilton, 2010). Furthermore, a recent study (Pilz et al., 2011) in healthy men who supplemented with 3332 IU of vitamin D daily for one year, noted a significant increase in total, bioactive, and free testosterone levels. Considering the well-described health effects of vitamin D, coupled with the potential impact of vitamin D on exercise performance, supplementation with this powerful vitamin should be considered by all individuals.

Research indicates that vitamin D toxicity is very unlikely in healthy individuals when used at amounts less than 10,000 IU/day (Vieth, 1999). However, the Food and Nutrition Board of the Institute of Medicine (IOM) and a recent Clinical Practice Guideline from the IOM in conjunction with the Endocrine Society (Holick et al., 2011) has set a conservative tolerable upper intake level of 4,000 IU/day (100 mcg/day) for all adults. This is similar to the dosage used in many clinical trials and is the dosage provided within D-Pol.

For optimal vitamin D absorption, taking vitamin D with the largest meal of the day seems most appropriate (Mulligan & Licata, 2010). Beyond this, it has been suggested that certain vitamin and mineral cofactors are potentially needed for optimal vitamin D action and effect. However, it should be noted that the need for these cofactors is debatable. Moreover, most of these co-factors are present in vitamin/mineral supplements, which most individuals consume regularly. The cofactors of interest include magnesium, zinc, vitamin K2, vitamin A, and boron. With regards to boron, aside from acting as a cofactor for vitamin D, one recent report indicates a testosterone elevating effect of this mineral (Naghii et al., 2010). It is possible that this may enhance the action of DAA on circulating testosterone. However, an earlier report for boron refutes these findings (Green and Ferrando, 1994). Collectively considering the above, boron and other co-factors are not included within D-Pol.