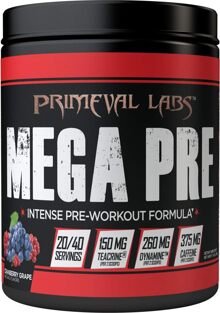 Go to Store
Quick Links to Deal PricesHow does this work and how do stores get listed? See our disclosure below to learn more.
Select Variation(s):
Size
Deal Price
20 Servings
Buy 1 Get 1 FREE
$44.99
BOGO
Go to Store
40 Servings
$56.23
Go to Store
Go to Store
Compare store prices

No longer do you have to choose between using a hard-hitting, high-stim pre workout or a “performance and pumps” pre workout. With Mega Pre Black, you get it ALL!*

Who is Mega Pre Black For?

Mega Pre Black is built for the serious athlete who commands the utmost from their body and mind and expects to perform at the highest level no matter what.*

Betaine (a.k.a. trimethylglycine) is a naturally-occurring compound in beets that assists in methylation and supports endogenous creatine production, supporting better energy, performance, strength, and power output during training. Betaine also functions as an osmolyte where it regulates cell volume and enhances cellular hydration.*

A powerful CNS stimulant and ergogenic, caffeine is renowned for its ability to increase energy, mood, motivation, and focus and well documented in countless research trials to enhance performance, power, strength, and stamina. release of dopamine, resulting in increased energy, focus, stamina, and determination.*

The harder-hitting, faster-acting cousin of TeaCrine, Dynamine is novel neuro-activating compound ideally suited for inclusion in Mega Pre Black due to the intense, jitter-free energy, motivation, and focus it provides. As an added bonus, Dynamine does NOT affect heart rate or blood pressure, and will not impact sleep.*

TeaCrine is a chemical cousin of caffeine that mimics the effects of caffeine (increased wakefulness, energy, focus, etc.), but without the tolerance or habituation of caffeine. Furthermore, TeaCrine doesn’t affect cardiovascular parameters or sleep. However, it does supply smooth, long-lasting energy that complements the immediate burst of energy brought on by caffeine remarkably well. Combining the two provides a “best of both worlds” approach that can only be enhanced by the inclusion of Dynamine, as featured here in Mega Pre Black.*

As if the combination of 325mg caffeine, 260mg Dynamine 40%, AND 150mg TeaCrine 40% wasn’t enough to ignite the senses and amplify training intensity, Mega Pre Black also includes an additional 68mg Infinergy to further sustain energy, mood, and focus and help athletes stay locked in no matter how daunting their training is.*