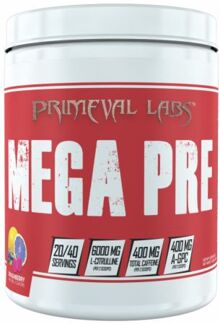 Go to Store
Quick Links to Deal PricesHow does this work and how do stores get listed? See our disclosure below to learn more.
Select Variation(s):
Size
Deal Price
20 Servings
$39.99
Go to Store
Go to Store
Compare store prices

Mega Pre Red is a delicious-tasting, hard-hitting pre workout specifically designed to help you take your workouts to the next level!*

This comprehensive, performance-boosting formula features 6g L-Citrulline, 3.2g Beta Alanine, and 3g Betaine along with a total of 400mg caffeine and two forms of choline for added focus.*

We’ve combined this complementary array of ingredients to delivery the ultimate pre workout experience, one that not only boost energy and focus but also enhances performance and pumps!*

Who is Mega Pre Red For?

Derived from choline, betaine is a naturally-occurring compound found in beets that enhances cellular hydration, assists in methylation, and supports endogenous creatine production. As a result, betaine has been noted to improve energy production as well as strength and power output during exercise.*

Choline is an essential nutrient needed for optimal cognitive function and muscle movement. It is also required for the biosynthesis of acetylcholine (the “learning” neurotransmitter). In addition to learning, acetylcholine also impacts memory, focus, and the mind-muscle connection.*

Mega Pre Red contains a TOTAL of 400mg of caffeine per serving from a combination of 350mg of fast-acting caffeine anhydrous combined with 68mg of long-lasting Infinergy dicaffeine malate (which yields 50mg caffeine).*

We combined these two forms to deliver the best pre workout experience possible, one that boosts energy and focus during training and sustains that increased sense of motivation for hours after all while avoiding the crash and jitters commonplace with other high-stimulant pre workouts.*

Huperzine is a potent and versatile nootropic that both supports heightened focus and exerts a measure of neuroprotection by defending the brain against glutamate (the neuron “death molecule”). Some evidence also suggests that huperzine may foster the creation of new brains cells (neurogenesis), too.*