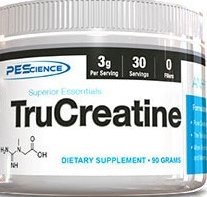 Go to Store
Quick Links to Deal PricesHow does this work and how do stores get listed? See our disclosure below to learn more.
Select Variation(s):
Size
Deal Price
120 Capsules
$11.04
Go to Store
30 Servings
$14.99
10% OFF
Go to Store
Go to Store
Compare store prices

When it comes to performance enhancers and muscle builders, creatine is the most used and researched single ingredient supplement. Through the years there have been dozens of forms of creatine, all claiming to be the latest and greatest. If you’ve been around a while, you remember the days of loading creatine, stacking it with a bunch of sugar, or drinking CEE that tasted like a combination of pennies and lemons. Gross! Thankfully...those days are long behind us and the standard now is what it should be...just take your creatine as is. Plain and simple.*

In typical PEScience fashion, we take it a step further. We make sure you are getting the purest form of creatine available...ever. In fact, it is scientifically impossible to make a creatine more pure than Creatine Anhydrous, the form found in TruCreatine. On top of this TruCreatine essentially has no taste...so you can combine it with anything, or nothing!*