Warning This product has been discontinued but is still available below. For a replacement, consider Performax Labs AlphaMax. 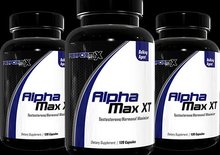 Go to Store
Quick Links to Deal PricesHow does this work and how do stores get listed? See our disclosure below to learn more.
Size
Deal Price
120 Capsules
$38.00
Go to Store
Go to Store
Compare store prices

Just like when you stack supplements together to get better results, Performax Labs AlphaMax XT is a formula with a blend of 11 specific ingredients that are “stacked” to help your body produce more testosterone so your muscles can squeeze out one more additional rep at your next workout. Then another one. Then another one . . .

The following are the 12 stacked ingredients at a glance.

Urtica Dioica Extract containing 3,4-Divanillyltetrahydrofuran
Now here’s a mouth full. Don’t even try to pronounce it, because you’ll hurt yourself.

Urtica Dioica is commonly known as stinging nettle, which is a plant.

Free testosterone, as opposed to bound testosterone, is active, useable testosterone. This is what provides the benefits typically associated with elevated testosterone levels such as increasing strength and muscle mass. When testosterone binds to sex hormone-binding globulin (SHBG), it changes from free to bound, and becomes useless.

Urtica Dioica extract helps “free” (so to speak) your free testosterone levels by binding to sex hormone-binding globulin in place of testosterone, so more testosterone is free to be used by your body. (1,2)

Mucuna Pruriens Extract (98% L-DOPA)
Now we have mucuna pruriens. This is a plant that supports testosterone and growth hormone production by releasing a chemical that provides a great natural source of L-dopa. This helps increase dopamine production in your brain.

Dopamine plays a part in growth hormone secretion. It is also associated with somatostatin secretion, which results in a greater effect of growth-hormone-releasing hormone (GHRH). (3,4)

Eurycoma Longifolia Extract
Also called tongkat ali, this herb extract has been included in the Alphamax XT formula because its root contain chemicals that seem to affect how the body not only helps testosterone level but supports normal levels of cortisol (a stress hormone that affects testosterone).

As you may know, stress at a certain level for many (not all) men can be a testosterone killer. So even a prolonged stressful hard workout, combined with stress throughout the day may have negative effects to a certain extent.

CASE STUDY: Supplementation of eurycoma longifolia was given to stressed adults for a period of four weeks. Results showed that the stress hormone cortisol was reduced by 16%, and testosterone increased by 37%. (5)

Withania somnifera (5% Withanolides)
More commonly called ashwagandha, this has been added in for the use against higher levels of cortisol, while at the same time enhancing your testosterone.(6)

Cortisol—the “Stress Hormone”—helps your body during stressful moments. But it also does the opposite of what testosterone does. It is a catabolic hormone that reduces protein synthesis and prevents tissue growth.

When working against higher levels of cortisol during a workout, your testosterone has more of a “fighting chance.”

Straight out of a science book for really, really smart people, this vital ingredient is an aromatase inhibitor that influences your estrogen and testosterone levels.

Aromatase inhibitors bind to the aromatase enzyme in your body, thereby inhibiting it from binding to its respective receptor site. The result of this inhibition is that it further prevents your body from converting testosterone into estrogen.

It also supports the production of adiponectin, which is a protein hormone that helps weight loss.

By including this in your diet, you may be able to eat more calories. And wouldn’t that be nice?

Ferula Asafoetida (Root) Extract (95% Ferulic Acid)
The chemical from the resin (gum-like substance)—which is from the herb, ferula asafetida—has been shown in documented studies to increase the ability to workout harder and longer. This, in turn, enhances more muscle mass, while also shortening the time it takes to recover after a hard workout. (7)

Coleus forskohlii (95% Forskolin)
There are a number of evidence-based studies on this herb for increasing size and strength.

This impressive little herb has a chemical compound that stimulates an enzyme called adenylate cyclase, which increases cellular concentrations of a cellular messenger called cyclic AMP, or cAMP.

cAMP is one busy bugger because it interacts with a host of different types of cells. When you raise levels of cAMP, you lower blood pressure, inhibit platelet aggregations (clotting), promote vasodilation (opening up of blood vessels), increase bronchodilation (improved breathing, which in turn increases energy), and, most importantly to us, increase thyroid hormone secretion and speed up lipolysis (fat burning).

Not only does this increased thyroid hormone production increase fat loss, but increased levels of cAMP activate something called protein kinase that’s been shown to activate hormone-sensitive lipases, which are involved in the breakdown of the building blocks of fatty tissue known as triglycerides. (8,9)

You bet it does! And that’s why it’s included in this formula.

And it’s easier to pronounce.

Did that make sense?

Steroid hormones are substances made from cholesterol, which circulate in the body, and work at distant sites by setting in motion genetic protein transcription.

There’s more to vitamin D than you first thought. And this is why you need to study up on nutrition.

You may not have the genetic profile for it, but knowing more about plants, vitamins and minerals can still make a big difference.

Boron Citrate
There are multiple vitamins and minerals that contribute to testosterone synthesis, such as vitamin D, and the minerals zinc and magnesium. But what is often left out is the mineral boron.

In fact, boron currently holds the most impressive results, the reigning champion on natural testosterone production in terms of scientific evidence.

Like this one, for example: 8 men were given 10mgs of a boron supplement every morning for 7 consecutive days. After the week had passed, blood results were compared from the first to the last day to see what results there were.

Zinc
Next to the prostate, did you know that there is more zinc in your testicles than in any other part of your body? You think zinc is trying to tell us something?

Zinc in the number one mineral that keeps your testosterone level in check. (13)

B6
If you know your basic ABC’s on the connection between vitamins and muscles, you know that this has to be included in Alphamax XT.

You need B6 because it performs over a hundred enzyme reactions involving the metabolism. Enzymes are proteins that your body uses to help chemical reactions take place.

B6 is important in the breakdown of glycogen that is stored in your muscle.

Warning This product has been discontinued but is still available below. For a replacement, consider Performax Labs AlphaMax.