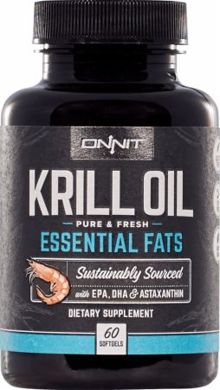 Go to Store
Quick Links to Deal PricesHow does this work and how do stores get listed? See our disclosure below to learn more.
Size
Deal Price
60 Softgels
$26.96
Go to Store
Go to Store
Compare store prices
See all Onnit Products on PricePlow
Ingredients

If you want to optimize how you move, how you think, or your overall vitality, you should consider Krill oil. Krill oil contains essential fatty acids like DHA and EPA that your body can’t produce on its own, as well as phospholipids and the important carotenoid, astaxanthin that aren’t found in traditional fish oil. These components help support cognitive, cardiovascular, heart, and joint health, making it a foundational supplement for Total Human Optimization.*

Choose Your Source of Omega-3s Wisely

Krill are oceanic omega-3 powerhouses. Omega-3s are essential fatty acids utilized by multiple systems in your body. “Essential” means your body can’t produce them on its own, so you have to ingest them from food or a supplement. Omega-3s can be found in both fish and seeds but it’s important to make sure you are getting them from the right source.

Foods like flax, pumpkin seeds, and walnuts contain the omega-3, ALA (alpha linolenic acid). But this is not the only omega-3 you’re looking for. Your body does best with EPA (eicosapentaenoic acid) and DHA (docosahexaenoic acid). ALA can convert to DHA, but at an extremely low rate – about 5%. It is mostly animal sources like fish and krill that contain DHA and EPA.

Eating seafood regularly is a good way to ensure you are getting EPA and DHA, however it comes with certain risks. Unfortunately due to contamination of many of our oceans, the longer the lifespan of the fish, the higher the potential for amounts of mercury, PCBs, and pesticides that accumulate in their tissue. This makes supplementing with krill an ideal choice.

Krill is a tiny organism harvested from icy cold waters of the Antarctic – far from industrial contamination. Their short lifespans, combined with the pristine environment from which they are harvested, ensure that krill have far less potential for toxins and contamination.

The use of krill as a nutrient source is more sustainable than other types of fish oil, such as cod or salmon.

At an estimated 600 million tons, the biomass of krill is more than double the biomass of human beings. The harvesting practices of krill for human consumption are tightly regulated and have a minimal impact on total krill population and virtually no impact on their predators. Between 1990 and 2009, only approximately 1/10 of 1 million tons of krill was harvested. 6.6 million tons is the precautionary limit set for the harvesting of krill by the Conservation of Antarctic Marine Living Resources. Krill fishing could increase nearly 50 times and there’d still be enough krill for humans and krill’s predators.

Our supplier goes to great lengths to ensure only krill are caught and not other types of sea life. They’ve been certified by Friend of the Sea thanks to their commitment to being as sea-friendly as possible.

Recent research suggests krill oil may support cognitive health. The omega-3 fatty acids in Krill oil are incorporated in phosphatidylcholine, which acts on brain health more efficiently than those incorporated in triglycerides.

Since the omega-3 fatty acids are bound to phosphatidylcholine in krill oil, this implies that they may be taken up by the brain tissues more readily than triglyceride-bound omega-3 from fish oil.*