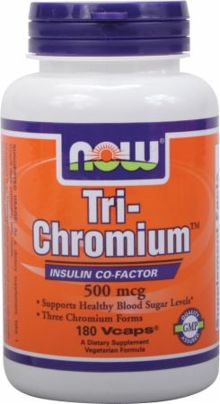 Go to Store
Quick Links to Deal PricesHow does this work and how do stores get listed? See our disclosure below to learn more.
Size
Deal Price
90 Vcaps
$4.75
Go to Store
180 Vcaps
$9.69
Go to Store
Go to Store
Compare store prices

Go to Store
Chromium is an essential trace mineral that works with insulin to support healthy blood glucose levels and plays an important role in the proper utilization of protein, fat and carbohydrates.* Cinnamon has been used throughout history by herbalists to promote healthy digestion and metabolism.* The latest research was used to formulate this new chromium compound. NOW wanted to produce a higher strength companion product to a 200 mcg. chromium picolinate, then decided to enrich the formula with two other kinds of chromium compounds, and still had enough room in the capsule to utilize 'True Cinnamon' powder as a base. Chromium is a mineral nutrient that may reduce the risk of insulin resistance. Chromium may also help insulin to metabolize fat, turn protein into muscle and convert sugar into energy.*

Chromium Picolinate has been used in studies which show that this form of the mineral is useful to support healthy glucose, insulin and blood fat levels, with a dose-related effect. It is also related to increasing lean body tissue according to a study done at Duke University. This form of chromium has been featured in many studies, some supported by the USDA.

Chromium Chelavite and ChromeMate are patented compounds known as chelates, which are predigested and easily absorbed. These particular chelates have chromium bonded to a niacin complex. Niacin-bound chromium complexes significantly increase the bioavailability and biological activity of chromium. Some studies have shown that niacin-complexed chromium is absorbed and retained 300% greater than chromium picolinate, supporting body weight reduction, increasing lean body mass and aiding in healthy insulin function in the body.*

True Cinnamon is one form of the common spice (Cinnaminum verum bark). Experiments conducted by the USDA have shown that it may lower blood sugar by mimicking insulin, activating insulin receptors and working with insulin in the cells to reduce blood sugar by up to 20%.* Cinnamon has some antioxidant benefits, whereas insulin is oxygen-reactive.*