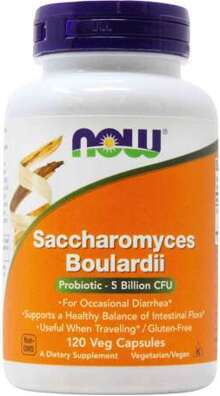 Go to Store
Quick Links to Deal PricesHow does this work and how do stores get listed? See our disclosure below to learn more.
Size
Deal Price
60 Vcaps
$8.99
Go to Store
Go to Store
Compare store prices

Saccharomyces boulardii is a tropical strain of yeast first isolated from lychee and mangosteen fruit in 1923 by French scientist Henri Boulard. It is related to, but distinct from, Saccharomyces cerevisiae in several taxonomic, metabolic, and genetic properties. S. boulardii has been shown to maintain and restore the natural flora in the large and small intestine; it is classified as a probiotic.

Saccharomyces boulardii is a probiotic yeast
that survives stomach acid and colonizes the intestinal tract. It promotes the health of the intestinal tract, helps to encourage a healthy gut flora balance, and supports a balanced inflammatory response. Saccharomyces boulardii has also been shown to support proper gastrointestinal function during a disruption to the normal balance of gut flora.

Boulard first isolated the yeast after he observed natives of Southeast Asia chewing on the skin of lychee and mangosteen in an attempt to control the symptoms of cholera. S. boulardii has been shown to be non-pathogenic, non-systemic (it remains in the gastrointestinal tract rather than spreading elsewhere in the body), and grows at the unusually high temperature of 37°C. S. boulardii is often marketed as a probiotic in a lyophilized form and is therefore often referred to as Saccharomyces boulardii lyo.