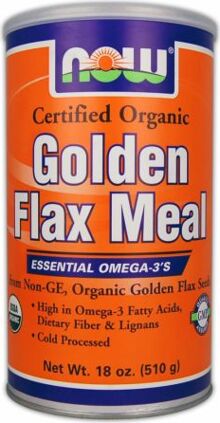 Go to Store
NOW Flax Seed Meal is cold processed. Flax seed meal is a convenient way of obtaining many of the nutritional benefits of flax seeds. Flax oil derived from Golden Flax Seeds is one of the highest known vegetarian sources of soluble fiber, magnesium, zinc and linolenic acid (an Omega-3 fatty acid). Our Golden Flax Seeds are grown on rich North Dakota soil. Whether brown or golden in color, NOW´s Flax seeds are from the same genus and species called Linum usitatissimum. According to the Flax Council of Canada, these northern grown plants are grown in different soil conditions and produce seeds with small differences in nutritional value. The Golden variety may have slightly higher fat as well as higher fiber content. Many customers have also remarked on the milder flavor of the Golden variety, which is usually preferred for bread making and other baked goods.

Of the 38-42% total naturally occurring fat in Flax seed, an average of 18% is Omega 3 in the form of Alpha Linolenic acid. Contrary to what is found in most seeds, Alpha Linolenic acid is the predominant unsaturated fatty acid found in Flax seed. Linoleic acid, which belongs to the Omega 6 family, is the predominant unsaturated fatty acid in most other seeds like safflower, sunflower, corn and sesame. Flax seed contains between 24-38% total fibers. The Golden variety contains up to 8 grams of fiber per two tablespoon serving. These seeds contain a healthy blend of both crude and soluble fiber. Flax seed are not only a rich source of Omega 3 fatty acids and fiber, but also contain up to 23% protein. These marvelous seeds have also been researched to be the richest source of Plant Lignans known.

Lignans, otherwise known as Secoisolariciresinol diglycoside (SDG), are active plant compounds that have been studied to support immune system function.* Flax contains up to 100 times the quantity of lignans as the next richest source, which is wheat bran. In addition to the tests performed to assure freshness and the nutritional values described in the information above, every batch of NOW Certified Organic Flax seeds is tested for microbiological safety. The typical range of analyses includes testing for standard plate count, yeast and molds, E coli, salmonella and heavy metals to ensure that only the best Organic Flax seeds bear the NOW Foods label.